Comedians, the original, explosive theatre piece from 1975 by English playwright Trevor Griffiths, which "invited the audience to laugh and then punished them for having done so", now seems like quite a long time ago – it’s 45 years old. Griffiths wrote the script after finding out that a former comedian was teaching young people how to do stand-up comedy in a rented room above a pub in Manchester. Comedians unfolded in three acts and in real time, set between 7.30pm and 10pm in the Manchester-based classroom where former comedian and septuagenarian Eddie Waters (played by Jimmy Jewel) taught his former trade to six working class pupils, including a dock worker born in Belfast (at that time played by Stephen Rea) and a lorry driver (a young Jonathan Pryce!). And the time had come for them to make their comedy club debut.

Gabriele Salvatores tries to reproduce this explosive magic in his Italian film adaptation of the same name Comedians [+lire aussi :
bande-annonce
fiche film]. And it’s not such a strange turn of events, given that in 1985, Salvatores brought the play to Milan’s Teatro dell’Elfo buoyed by a cast of young actors destined for the world of fame, namely Paolo Rossi, Silvio Orlando, Claudio Bisio, Bebo Storti and Renato Sarti. The play ran for three years and was the motivation for the present cinematic adventure.

When it comes to comedians, Salvatores has discovered quite a few of them by way of his films, which have helped so many of them grow. Last year, Covid-19 put pay to his plans to make a period movie, so Salvatores asked his actors to commit to just two weeks of rehearsals, shooting and staging the text as if it were a piece of theatre, filming in chronological order with long, single takes, in just four weeks (“to the delight of the producers”, he remarked).

And so it is that one stormy night, in a classroom and preparing themselves for their debut, we find the brothers Filippo and Leo Marri (the duo Ale & Franz), Samuele Verona (Marco Bonadei), Gio Di Meo (Walter Leonardi), Michele Cacace (Vincenzo Zampa) and young Giulio Zappa (Giulio Pranno, who made his real-life debut playing an autistic boy in Salvatores’ 2019 title Volare [+lire aussi :
critique
bande-annonce
fiche film]), each vested with their own style and overseen by their teacher Eddie Barni (the staggering Natalino Balasso).

Scathing Eddie Barni has a humanist approach to laughter. “Learn to laugh at yourselves if you want to make other people laugh”, he suggests. “Comedians find out what it is that the people listening to them in the room are trying to run away from. Most comedians serve up fears, prejudices, taboos. But the best ones are those who enlighten us!”

Unfortunately, the person selecting them and judging whether they’re fit for the entertainment world subscribes to an entirely different philosophy: the president of the Agency for Artists and Managers, Eddie Barni’s arch enemy played by the king of Italian Christmas comedies Christian De Sica, believes comedy is an escape and that actors should indulge the audience’s tastes if they hope to be successful, appear on TV and make shedloads of money.

Comedians isn’t a comedy which is made to make us laugh; there actually aren’t many laughs at all. It’s an essay about comedy and artistic choices: between retaining one’s integrity and staying true to oneself or taking the easiest road of fast-laughs comedy. Unfortunately, this great piece of theatre doesn’t manage to become a film. And Pranno doesn’t manage to fill the boots of the skinhead lorry driver of the original work, who was so memorably described by the Playhouse’s artistic director Richard Eyre, who portrayed him as "a violent, verging on psychopathic, romantic and deprived boy, consumed by furious desperation”.

Comedians is produced by Indiana Production in league with RAI Cinema and in collaboration with the Friuli Venezia Giulia Film Commission. The movie enjoys the support of the Italian Ministry for Culture’s Film and Audiovisual Department and will hit Italian cinemas on 10 June, distributed by 01 Distribution. Sales are in the hands of RAI Com. 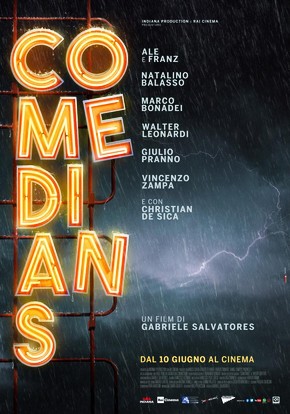