Critique : among us women

The first feature-length documentary by German director Sarah Noa Bozenhardt and Ethiopian filmmaker Daniel Abate Tilahun, among us women, which has just world-premiered in DOK Leipzig's International Competition, looks at the situation that women in rural Ethiopia find themselves in from the standpoint of pregnancy. A surprisingly calm and quiet film, it essentially shows us the life of these women in a beautifully dignified manner.

Our heroes are 25-year-old farmer Hulu Ager and midwife Endal Gedif from the village of Megendi in the region of Debre Tabor. Hulu is expecting her fourth child, and she regularly visits the health centre for check-ups, but like many other women, she does not trust the state system when it comes to giving birth. Despite the efforts of medical professionals Welela and Sirki, who visit the village to educate the population and discuss their concerns, the women are hesitant: it's a long drive to the health centre, and there is often no fuel for ambulance cars.

Thus, giving birth in her hut in their village, surrounded by her loved ones, and with the help of the sensitive and experienced Endal, certainly seems a safer and more comfortable option for Hulu, despite the complications she had with her last delivery. And Bozenhardt and Tilahun show us why: a woman will often go into labour in the arms of her husband or another member of the family, in a familiar environment and with Endal completely dedicated to helping her.

Even though this hut is shared with the family's cows, the number of which determines one's status in the village, which has no electricity or running water, the place is clean and tastefully arranged – despite the inevitable yellow canisters they fetch water from the nearby lake in. The way the filmmakers present it, the event of giving birth seems to be a quiet affair in rural Ethiopia, with the woman surrounded by sensitive and caring people.

In various conversations between the women, we are reminded of other issues plaguing this patriarchal society, such as female circumcision, even though men appear only occasionally and seem to have very little agency in the film. Welela herself says she is unable to enjoy sex due to having been subjected to this ancient custom, in a lively conversation at a hairdresser's where women talk openly about sex.

The most surprising aspect of the film is how the co-directors aim to immerse us in the everyday life of the characters, as opposed to making an urgent, issue-driven documentary that the topic would naturally lend itself to. They take great care to show us the beauty and dignity of their lives, crafting an idyllic image, as opposed to the usual poverty porn that is often present in films about underreprestend communities in the third world. This represents another danger of the picture: we may end up becoming too idealistic. However, the issues that the doc deals with are primarily tackled through insight from the characters that are experiencing them, and if Bernarda Cornejo Pinto's cinematography captures eye-pleasing views of the savanna and the village, complemented by the tasteful and well-measured score by Anna-Marlene Bicking, and if people there seem to live in a dignified way despite what we would perceive as poverty, perhaps this danger rather lies within our Western gaze and its inherent cynicism.

among us women is a production by Germany's Evolution Film, and its co-producers are Hiwot Admasu and Beza Hailu Lemma, of Ehtiopia’s Efuye Gela Media Productions.

plus sur : among us women

Parmi les lauréats européens du festival allemand figurent Republic of Silence, A Sound of My Own, Bucolic et among us women

Critique : among us women 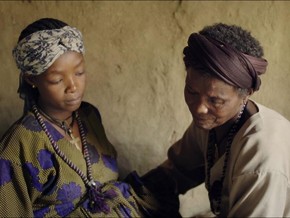