Critique : Do Not Argue with the Staff at the Baths

Like most of Ivan Cherkelov’s films, which are barely known outside of Bulgaria, his latest has had a difficult path to distribution, too, this time owing to the pandemic. Although it was completed in 2020, Do Not Argue with the Staff at the Baths [+lire aussi :
bande-annonce
fiche film] has been screened solely at the recent Golden Rose Film Festival in Varna and is only now heading to Bulgarian cinemas, on general release from 12 November. In any case, success with audiences has never been Cherkelov’s main goal, as he’s probably the most uncompromising and hermetic auteur in Bulgarian cinema, characteristics that have brought him heaps of criticism locally.

With Do Not Argue with the Staff at the Baths, he continues his artistic meanderings through human relationships and existential dilemmas with the help of some moody, contemplative imagery, conjured by visual and stylistic patterns that are repeated in all of his films, and lensed by talented cinematographer Rali Ralchev (Christmas Tree Upside Down, Crayfish [+lire aussi :
critique
fiche film]), with whom Cherkelov usually works.

Protagonist Andrey (Alexander Triffonov) returns after decades in another country to his sad and deserted native town, in order to find his terminally ill sister. He scours streets, bridges and the funeral home during the day, on his own, while at night, he indulges in lonely, drunken monologues and, of course, memories. He recalls the Saturdays in the city baths, managed by his grandfather, as well as the pine tree he planted, which, according to the municipal experts who expropriated the family property, costs €10 as of today. His sister Dora (Silva Milkovska) walks along parallel paths, also all alone: she swims, lights matches, and contemplates their flame and the autumn from the gradually ever more distant viewpoint of her fading life. At one point, Andrey and Dora inevitably meet and start to quarrel over old family affairs, but they also remember better times together. The depressing cityscapes and the casual portraits of sorrowful faces passing by form a background context of devalued existence, which suggests an upcoming farewell. Some inserted archive footage, black-and-white scenes from the communist era, shows more cheerful and dynamic, but long-gone, times. And this reinforces the contrast between the bright hopes at the beginning of life and the sense of decay towards its end.

Andrey’s return is both physical and metaphysical: he re-explores the now-unrecognisable places of his childhood today while also processing his crumbling reminiscences and ephemeral associations from the past, imprinted in his emotional memory. The narrative is fragmented and uneven, just like these capricious and illogical bursts of remembrance. The film’s poetic fabric is more of a combination of shaky moods than a storyline per se, changing along with the eclectic soundtrack of waltz, rock and gypsy music, while Ralchev's camera draws a fine parallel between the melancholy of autumn and the farewell to life. It is probably the most nostalgic of Cherkelov’s works, as it evokes the desire to simply let oneself sink and get absorbed by the mists of time.

Do Not Argue with the Staff at the Baths was produced by Bulgaria’s Nach-Zach Vision.

plus sur : Do Not Argue with the Staff at the Baths

Critique : Do Not Argue with the Staff at the Baths 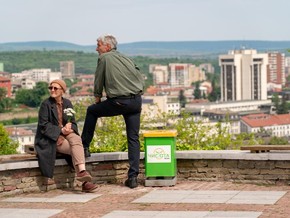