The unworldly eyes of four teenagers offer David Varela a clear, sharp lens through which to contemplate one of the Spanish Civil War’s bloodiest encounters (the Battle of Brunete, fought 24 km west of Madrid) in his second film, Un cielo impasible [+lire aussi :
interview : David Varela
fiche film]. The documentary has been selected to take part in the Tierres en trance section of the 59th Gijón International Film Festival.

Impelled by youthful curiosity, Varela’s experiment/vehicle, at times reminiscent of Who’s Stopping Us [+lire aussi :
critique
bande-annonce
interview : Jonás Trueba
fiche film], grants his young leads the freedom to immerse themselves fully in the experience he offers them. That experience is chance to become profoundly familiar with a place, well within reach of their own homes, that has been veiled in oblivion; a place where thousands of people lost their lives not so very long ago. They are able to touch, feel and even dress in the uniforms of real soldiers, many no older than they are now, who died in a conflict barely acknowledged by the education system.

Without tension or artifice (unlike certain Parallel Mothers), Un cielo impasible manages to reclaim Spain’s historic memory while also questioning how that memory is passed down (or not) to younger generations. With on-camera support from historians of that period, the film makes a plea for a different approach to dealing with the past. It urges Spain to move away from the viscerally polarised positions that tend to dominate any political overture towards the country’s history of dictatorship and Francoism, which it has tried to bury under a mound of collective amnesia.

Varela guides the group through Brunete’s forgotten trenches and the battlefield where the slaughter took place, while drones swoop over the eerie scene to the sounds of war, survivor testimonies and the young people’s own reflections. Their clear-eyed gaze would make a fitting metaphor for the future direction of Spain’s reckoning with its Civil War past — which left behind a legacy of unhealed wounds still festering today.

Entirely self-taught, David Varela has been producing, editing and directing his own films since 2010. His previous work includes the feature Banaras Me, short film Último retrato and the medium-length Freedom to Kill the Other’s Children. As an editor, he also works on other filmmakers’ projects, including Carlos Serrano Azcona’s Banderas Falsas and Correspondencias invisibles, a CollabFeature still under development.

Un cielo impasible is an independent production by David Varela. The score was composed by Jonay Armas. 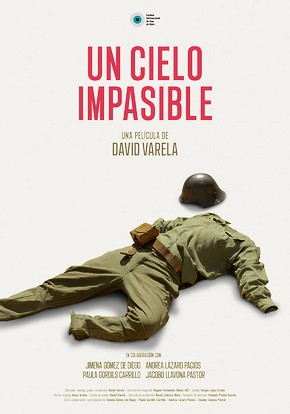