Nicolas Giraud, who’s had a steady career acting in French features, has just brought The Astronaut [+lire aussi :
bande-annonce
fiche film], his absurd yet endearing second directorial effort, to a Cairo International Film Festival world premiere in the International Competition. An unabashedly personal film for Giraud, you have the impression watching The Astronaut that the final result, with its sometimes elaborate mise-en-scène and production design, and its carefully subdued touches of emotion, has turned out just how he wished, and constitutes exactly what he’d want to express about many things close to him. Still, the film is severely hamstrung by not quite seeming aware of how ridiculous and far-fetched it is, with its intentions, however well-meaning, not having the desired effect.

Perhaps we should be less defeatist about the ageing process and acknowledge how life’s progress tends to resemble a marathon, rather than a sprint, but it’s very tempting to write, or make a Freudian slip, that Giraud’s character, Jim, a propulsion engineer for the French aerospace company Arianespace (what a self-flattering job!), is a boy with a dream, rather than a melancholic forty-something, so rigidly and innocently focused is he on his life’s pursuit. Despite his likely very fulfilling professional commitments, he really is the kid who said “astronaut” when asked what he wanted to be when he grew up, and never amended his answer. Crestfallen at being rejected in the final round for the European Space Agency’s spaceflight programme (recently shown in Alice Winocour’s Proxima [+lire aussi :
critique
bande-annonce
interview : Alice Winocour
fiche film]), he embarks on the obvious thing and builds a rocket in a secret workshop on his grandmother Odette (Hélène Vincent)’s farm. The enormous contraption was seemingly assembled in DIY fashion, yet looks like it was confiscated from a highly classified part of NASA. 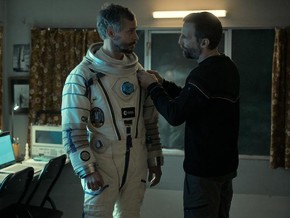