“My idea is to have absolute intimacy within the open space”

07/05/2018 - Cineuropa talks to Czech writer-director Jan Prušinovský about his latest project in development, which was presented at the recent Czech Film Springboard 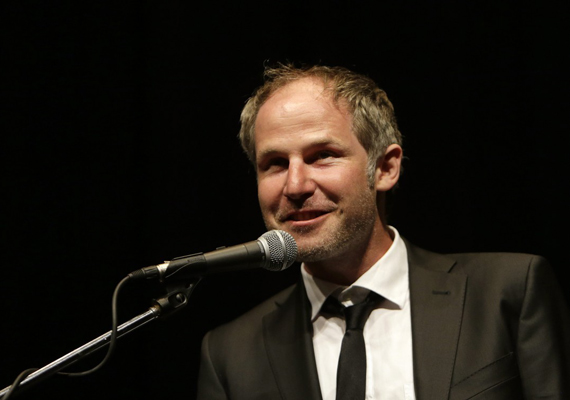 Czech director-writer-producer Jan Prušinovský helmed the successful drama The Snake Brothers [+see also:
film review
trailer
interview: Jan Prušinovský
film profile]. Prušinovský, who is also a prolific television director and co-wrote the series Gnome, The Fourth Star, Sunday League and the web series Autobazar Monte Carlo, and who is readying his latest series, Most!, is now also developing a new feature-length project. Mistakes tells the story of a girl whose past of starring in a porn video catches up with her when she meets her “true love”, and it is described by Prušinovský as a romance. He presented the project at the 2018 Czech Film Springboard (read the report), where Cineuropa sat down with him to talk more about the project and his vision.

Cineuropa: You said that your new project, Mistakes, is going to be quite a change compared to your previous works. In what sense?
Jan Prušinovský: In a personal sense. If you are doing something, you can’t just be doing it all over again. That is also how The Snake Brothers originated. I had done tons of comedies, and all of a sudden I had this text in front of me that was not so funny. After that, I did plenty of comedies, and now this script has appeared for Mistakes. I told myself that it was something that particularly fascinated me, so I am coming back to it as part of a break from my work on television and series.

In relation to your new project, you said that Czech people are growing up in an atmosphere of liberalism, and that is somehow shaping their personality.
I believe so. I think that in some ways, we, as a nation, are like pagans. And it touches on these very intimate topics, like one’s inner respect for one’s own body.

Did this pique your interest as a motif for the story?
First of all, this is my personal belief, and I think this is still a taboo subject. A lot of girls – and this is not related to education or social status – make money on the side from something that is not entirely kosher, and there is no discussion about it. It also happened to me: when I did a casting for an episode of a series, a girl came along who was not ashamed about having shot porn. But sometimes people don’t think about the consequences when they want to lead a normal life.

Mistakes is billed as a romance.
That’s right; the story is about a girl who sells her most intimate parts, and romance is also a very intimate thing. When these things meet, it is bound to create a dramatic situation.

Does your directorial vision for Mistakes share any similarities with The Snake Brothers?
I believe so; there is always some kind of a hallmark. I do not do it consciously; I just come on set and shoot, and then I edit it, so there is some similarity there. The Snake Brothers was rather an urban film, whereas Mistakes will take place in the countryside. My idea is to have absolute intimacy within the open space, in the landscape of the village, as we see people who do not know how to come to terms with their past in such an idyllic place.

You use a lot of hyperbole in your works; will this also apply to Mistakes?
I think it has to be there. I personally do not like films, even serious dramas, that do not make fun of themselves at any point, and which take themselves too seriously. But that is not real life. So there will definitely be some humour in Mistakes, but it is not the essence of the movie; I’m not going to close each scene with someone falling down the stairs.

Will Mistakes be a chamber piece?
Yes, there are four actors. The story takes place during all four seasons, but it will be an intimate drama revolving around two people.

Are there any other projects that you are working on?
I have a big dream project, for which I have already written the script, Grand Prix, which is now in development. It is about three friends who want to go to see the Grand Prix in Barcelona. However, there are three of them, and they only have two tickets. My plan is for it to be a “Euro road movie”. We also visited the Formula racing in Barcelona, and I discovered new things that I am going to incorporate into the next version of the script.

Ivan Hronec • Distributor, Film Europe
“This will sound strange, but during the lockdown we managed to have some progress”

Matúš Ryšan • Director of Out Of Pure Conscience
“After more than 25 years of existence, a ‘first wave’ of Slovak cinema is starting to form”