Michaela Haberlander has been working for the FFF Bayern since its beginnings 13 years ago. The FFF Bayern is one of Germany’s leading regional funding bodies with an average budget of 27 mio €/year. At the FFF she is in charge of script funding and international relations with a special dedication to animation.

What are the goals of FFF?
The FilmFernsehFonds Bayern (FFF) has the goal of developing the film funding system, both in terms of quality as well as quantity. The FFF is owned by the Free State of Bavaria (55%), public and private television stations (12%) as well as the Bavarian Regional Media Authority (BLM). 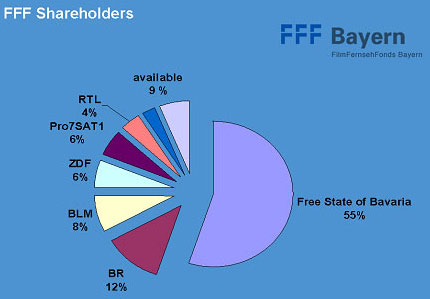 Which kind of project the FFF does finance?
The FFF finances several stages of production:

1. Screenplay funding.
A conditionally repayable, interest-free loan may be granted for the development of a motion picture screenplay. Only authors are eligible to file applications. A treatment with at least one fully elaborated shot sequence including dialogue and a letter of intent from a producer residing in Bavaria shall be attached to the application. The loan is of maximum €20.000 per application or €30.000 if several authors are involved.

2 Project development.
Funding may be granted for the development of motion pictures or television films. Only producers may file applications. The funding shall be granted as a qualified, repayable non-interest-bearing loan. The loan may amount to a maximum of 70% of the calculated project development costs, but shall not exceed € 100.000 per project. The amount of the loan shall be spent in Bavaria to the extent that this is possible.

Qualified repayable loans may be granted for the production of motion pictures and television films. Only producers are entitled to file applications for funding. The production of feature films (motion pictures) may receive funding of up to 30% of reasonable production costs, not exceeding € 1.6 million (or 530.000 if televisions films), if the producer is a resident of, or has a branch office located in Germany, and he deems the refinancing of the funded portion on the national and international market a viable option. As a rule, funding for feature-length films can only be granted if a legally binding contract for distribution is also submitted. In the case of television films, a signed contract with a television network for the broadcasting of the film must be submitted. No less than 1.5 times the loan amount granted must be spent in Bavaria (Bavaria-related effect). A higher "Bavaria effect" must actually be produced if it is indicated in the funding application. In individual cases, the Bavaria-related effect may be disregarded in part or in its entirety, if it is ensured that in return, another federal state subsidy program disregards its federal-related effect in the same amount to the benefit of Bavaria on another project. All premiere screenings of funded feature-length films shall take place in Bavaria.

The Bavarian regional effect has been very positive in 2008, as shown in this table: 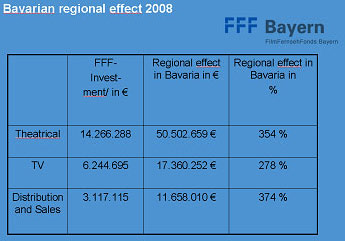 4. Distribution and Foreign Sales Funding.
Distribution and world sales companies may be granted qualified repayable loans for the distribution and sales of feature length motion pictures, particularly of those produced or funded in Bavaria. The loan may amount to 50% of all documented preliminary marketing or sales costs (e.g. film prints, advertising and marketing), not exceeding € 205.000. If distribution or foreign sales projects are being funded by a variety of funding agencies, the grants should not exceed 50% in total. The 50% limit for the accumulated funding can be exceeded for distribution or foreign sales projects deemed of special cultural importance. At least the amount granted as a loan shall be utilized in Bavaria.

5. Bavarian Bank Fund.
The funds of the BBF are to be used to finance projects that promise a particular economic success in their exploitation. Gap financing will be provided for the production and distribution of feature length cinema films. The BBF will only finance those projects which can furnish a funding recommendation from FilmFernsehFonds Bayern. The financing can amount to as much as 100% of the recommended FFF funding for the respective project, at most, though, € 1 million (production) or € 200.000 (distribution). The finance will be granted as a conditionally repayable loan.

8. Film Projection and Presentation.
Allowances within the funding framework of the supervisory board may be granted to Bavarian commercial movie theatres which have presented a film program of outstanding quality during the past calendar year, with an appropriate share of German films (including short subjects) and children’s films.

In 2008 the distribution of funds between the different sectors has been as follows: 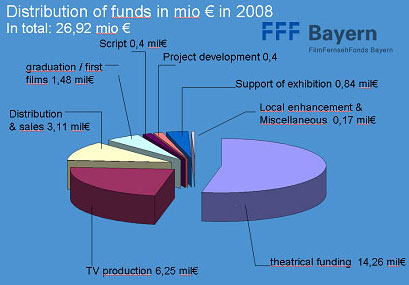 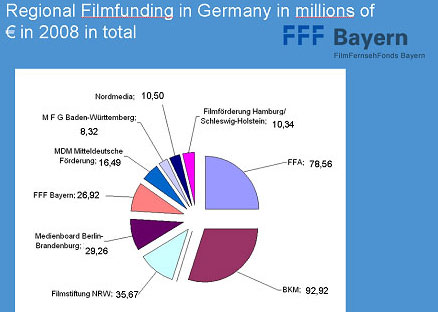