Skyfall, produced by Albert R. Broccoli’s EON Productions with Metro-Goldwyn-Mayer Studios and Sony Pictures Entertainment, was the first Bond film to cross the $1 billion mark in worldwide revenue, and became the second highest-grossing film in the UK. The promotional cost has been estimated at around $100 million, approximately $75 million of which was spent on marketing. Skyfall is the first Bond movie to be shot digitally and screened at IMAX. The film was targeted as global audience, especially when you consider that London had the whole world’s attention, hosting the 2012 Olympic Games. The outstanding marketing strategy culminated in Daniel Craig’s appearance alongside the Queen at the event’s opening ceremony.

One of the most effective marketing strategies in Bond films has been the product placement of numerous brands.

Bond is no stranger to product placement, with even Ian Fleming’s novels full of specific brand names – from Aston Martin, to Guerlain’s Sapoceti soaps – however, since the film franchise began, they have been becoming increasingly common: from 007's Tom Ford-tailored suits, to Q's Sony gadgets, Heineken beer, Omega and Aston Martin. His new drink of choice, Heineken, has proved an ongoing sticking point with fans, particularly after a big-budget ad that actually roped Daniel Craig into the action.

VisitBritain, Britain’s tourism office, used Skyfall as part of a marketing campaign to attract the tourism of international audiences, using a mix of viral and print advertising, as well as its social media platforms. Their efforts reached a total audience of 653 million people around the world and generated £3.5 million worth of exposure for the Britain brand and partners. The campaign had a positive effect on travel, with 16% of people who recalled the “Bond is Great” campaign having booked a trip to Britain and 35% of those who recalled the advert saying they strongly intend to visit Britain in the next three years. Skyfall also helped boost tourism in Scotland with visits up to Glencoe, one of the film’s shooting locations, up by 41.7%.

You Tube: The Coca-Cola Company’s “Unlock the 007 in You” campaign for Coke Zero challenged unsuspecting train passengers to unlock the 007 in them for their chance to win exclusive tickets to Skyfall. These exclusive tickets weren’t free, however, and saw people having to go the extra mile and unlock their inner 007, in less than 70 seconds, to win. Coke themselves have commented on the results they achieved from the campaign. As of November 2012, the video received 7.1 million views on You Tube with 832,300 shares on social media and was included in Mashable’s Top 100 most shared commercials. It also earned the title of most shared Bond-related ad. 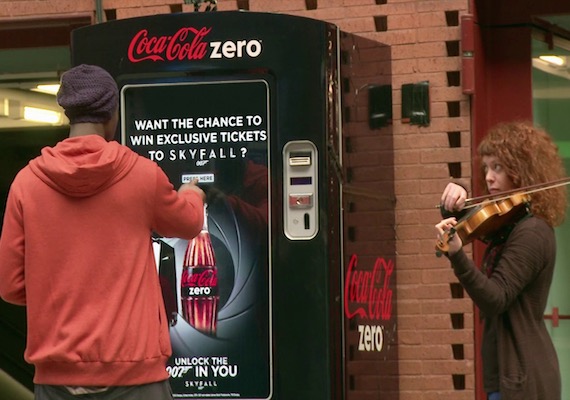 Unlock the 007 in You campaign

Twitter: The Twitter activity began 12 months before the film was released, prompting people to start discussing the film and labelling it as a “must-see” movie.

In May 2012, the release of the first Skyfall trailer generated 54,752 mentions and positive buzz for the upcoming film, with references to the film as “amazing” and “awesome”.

October 2012 saw the official release of Adele’s Skyfall theme song, which resulted in the second highest peak of the 12 months, with 103,948 mentions of the film.

The film’s record-breaking opening weekend of 26-28 October 2012 generated the most buzz of all, with 311,485 mentions, most of which referenced excitement about seeing the film and its quality.

Spectre, the 24th entry in the James Bond series, used many diverse marketing strategies and it is believed to have featured more product placement than any of the preceding offerings in the 007 series. Ranging from Tom Ford’s suits, Heineken beer, Bollinger champagne and Sony mobile phones, a wide assortment of companies cashed in on the secret agent’s enduring appeal.

The Omega Watches advertisement used the character of James Bond to help boost the company’s popularity.

Alcohol is in steady supply throughout the film. While Bond does order a martini, dirty with olives, he is also seen drinking from a green beer bottle, which is almost certainly Heineken, giving the company’s lucrative deal with the film.

In Skyfall, Bond sipped more obviously from a Heineken bottle in a bar scene, and the company, in advertisements for which Craig has appeared as Bond, is believed to have shelled out £28 million for the privilege. This, in itself, paid for almost one third of the films £94 million budget. 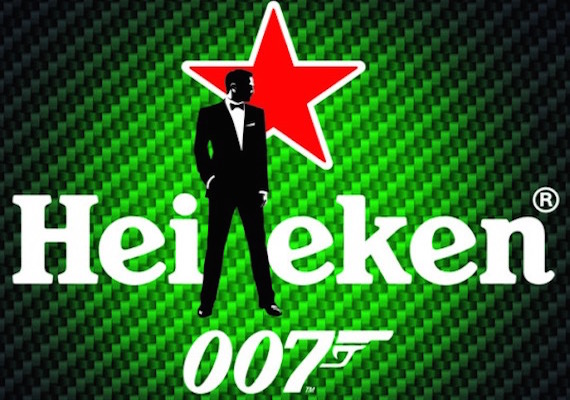 Other drink brands that have paid for an association with Spectre include: Belvedere vodka, Bollinger champagne and The Macallan malt whisky, a bottle of which can be seen on Bond’s living room table.

Belvedere vodka, the world’s original luxury, collaborates to promote Spectre. The marketing operation included a global advertising campaign and a wide range of promotion and activation rights around the film. The campaign was launched on February 2015, Belvedere promoted its deal of a “shaken, not stirred” martini vodka in the film with two limited edition 007 branded vodkas and cocktail recipes on its website.

On-screen presence: Sony promotes its presence in the film with a “Made for Bond” ad campaign for its Xperia Z5 phone. The campaign-starring actress, Naomie Harris as Moneypenny, uses Sony’s RX 100 IV camera to capture super-slow motion surveillance of the villains, before a chase unfolds as she tries to deliver Bond’s Xperia.

In terms of cars, the film has a tie-in with Jaguar, featuring a C-X75 during a thrilling Rome-set car chase, while Land Rover also had a number of their cars on display and rolled out brand new models.

Even the main promotional campaign for Spectre managed to sneak in favoured brands to influence fans. A simple shot of Bond glowering outwards sees him wearing a polo neck from N. Peal, as the fashion label had signed a deal to dress Bond in its £200 cashmere jumpers. Other brands that can be spotted in Spectre are: Rolls Royce, CNN, The Guardian, The Times and gun brands like SIG-SAUER P226R and Walter.

The filmmakers have previously defended product placement, claiming it is the only way to fund the stellar budgets they need. Spectre is reported to have cost £226 million to make. Craig has publically defended the amount of product placement in the film, claiming the films would have been too expensive to make otherwise.

An intelligent marketing tool that Sony Entertainment Pictures employed with the two films was creating a 360-degree marketing campaign. Through the various brands in the films, they obtained more promotion and social media presence, the movies were also constantly announced in different environments, helping to reach more diverse audiences and generate more awareness, not only for the films, but also for the brands and products involved.

Spectre posted a teaser trailer six months before the film was released. This led to millions of people starting to talk about the film and many Bond fans started to get excited about this.

Sony Pictures was the first production company to create a Snapchat Discover channel which featured daily content from 15 publishers, including BuzzFeed and People, at the top of the application page.

The sponsored James Bond Discover Channel on Snapchat was the first of its kind in the world. It was available for 24 hours and published numerous photos, behind-the-scenes videos and some interactive elements. Any Snapchat users who swiped through all of the videos were then encouraged to message their friends with a Snap reading, “Come see Spectre with me!”. The channel was similar to the Facebook Canvas Ads advertising format and, due to its exclusivity, the campaign led to high awareness levels, engagement and press coverage. 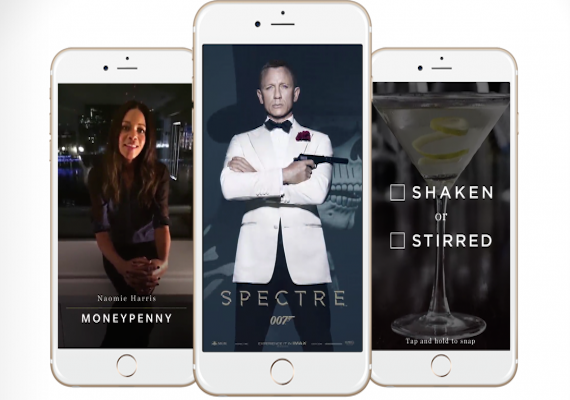 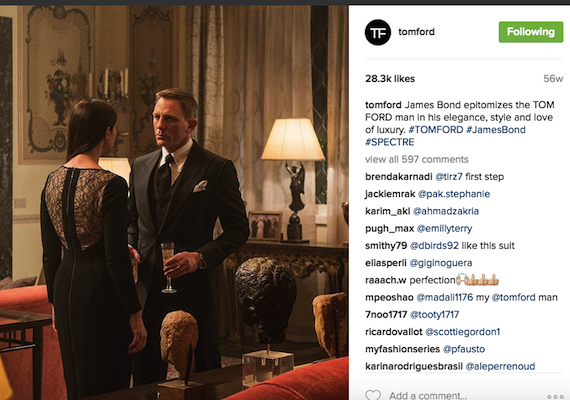 VisitBritain back on board as a marketing partner: The “Spectre campaign” was launched in more than 60 countries to encourage fans of the franchise to visit Bond’s UK home while going on their next holidays.

As the official national tourism partner for the theatrical release of Spectre, VisitBritain’s global campaign used a mix of outdoor billboards, print, digital and social media. This included exclusive, behind-the-scenes footage from Spectre through its dedicated campaign page. Other highlights included the release of four new 360-degree images of key filming locations from the movie (including Blenheim palace, Camden, Westminster Bridge and City Hall) to be promoted internationally through VisitBritain’s extensive social media channels. The immersive 360-degree experiences would give overseas visitors a virtual opportunity to step inside some of the iconic British locations showcased in Spectre. The campaign marked the third marketing partnership between VisitBritain and Sony Entertainment Productions and MGM studios.

As part of the “Bond is GREAT” campaign, 007 fans from around the world also had the opportunity to enter an exclusive online competition on the VisitBritain website for a chance to live the Bond lifestyle in Britain. The prizes included a chauffeur-driven Aston Martin, a private visit to Madame Tussauds and a stay at one of the exclusive Radisson Blu Edwardian Hotels. There was also a “Bond is GREAT” advertisement featuring clips from previous Bond movies and exclusive Spectre footage on VisitBritain’s YouTube channel. 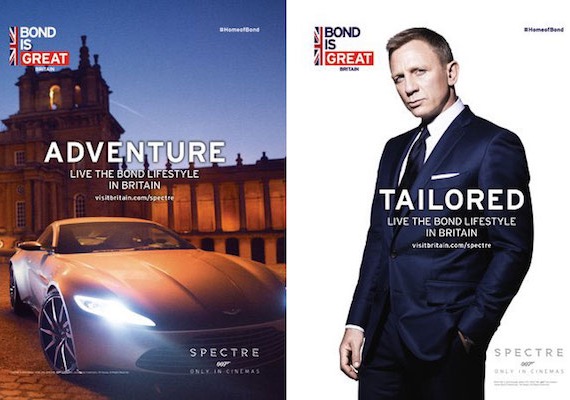 After Spectre was released in theatres in October 2015, the social media activity and media coverage continued because of the rumours of Daniel Craig leaving the role of the secret agent. Fans of the franchise and the media were left wondering who would be the next actor to portray the secret agent on screen, and started to discuss their favourite candidates and making their own suggestions.

Recensione: Crock of Gold: A Few Rounds With Shane MacGowan