Following on from the European Screens Conference, MeCETES has invited speakers to write a blog about their conference paper. This report examines the impact of digitisation on young people's viewing preferences and practices in Flanders.

Having internalized the participatory Web 2.0 environment from its very start, today’s teens are said to be at ease streaming, sharing and spreading content through all different types of devices – ranging from screens as large as a smart TV, to as small as a smartphone. As such, their (media) horizons have been expanded far beyond those who grew up without internet, or even in the more static Web 1.0 era. At least, so it seems.

The possibilities of media use are indisputable. Anyone with a (properly charged) smartphone and an (fast and stable enough) internet connection could stream a film anywhere, anytime – to name just one of many options.

However, there is little comprehensive research on film audience preferences and practices. Audiences could access any film, anytime. But do they? And what about the traditionally popular film consumption practices such as visiting the cinema?

There is an important implication embedded in these questions: if more ‘traditional’ film watching preferences prevail, contemporary audiences might be limited in their choices by linear television broadcasts or cinema programmes. In other words, the media horizons of contemporary youth might have expanded only theoretically.

The research project Screen(ing) Audiences explores this. The study is grounded in a representative sample of 1,015 respondents aged 16-18 who were questioned on their film watching practices. The respondents were all based in Flanders, the Dutch-speaking region of Belgium.

Contemporary young people enjoy watching film, and watch film frequently. Nine out of every ten 16-18 year-olds saw at least one film in the week before completing the questionnaire – with an average of 2.5 films per week. Moreover, watching film is loved: only 3% do not enjoy watching film.

We therefore take the practice of watching film as a starting point to question contemporary media consumption possibilities in relation to different types of screens (access) and films of different geographical origins (content). 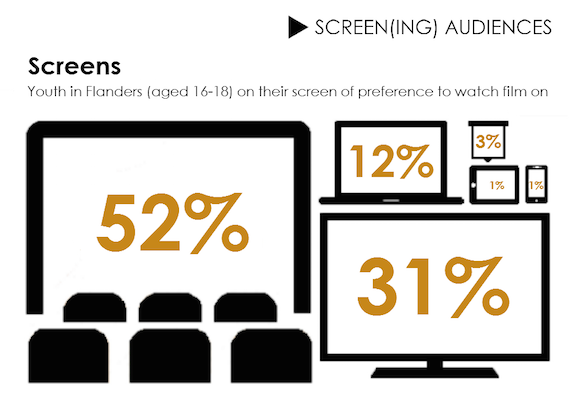 We find that film is most frequently watched on television. 83% of Flemish young people accesses film in a linear broadcast on television at least once a month. Half of all respondents does so once a week.

Similar numbers surface on watching films recorded on television, the second most popular way to watch film on television. The third most practiced is watching film on an owned DVD or Blu-Ray: 32% do this at least once a month, while another 32% do so yearly. By comparison, 52% of all youth in Flanders visits the cinema at least once a month. Another 45% visits the cinema yearly.

One striking finding is that smaller smartphone and tablet screens are very unpopular for watching film. 85% of Flemish young people never using one of these screens.

The PC/laptop is slightly more popular, especially for watch filming via streams that are not-paid-for (thus excluding subscription stream services such as Netflix). A fifth does this monthly, another fifth does this yearly.

Watching film on either an owned disc, such as DVD or blu-ray, or via digitally stored file comes second and third. Yet, well over half of Flemish youth indicates never to watch film this way.

This means that film is mostly preferred and accessed on traditional screens. Moreover, content is accessed through predominantly traditional channels, restricted by distribution windows: scheduled in a cinema, broadcast on television, or released on a disk. This means that contemporary young people are still limited in their access by present film schedules – both in hour and content.

Hollywood films still the most popular 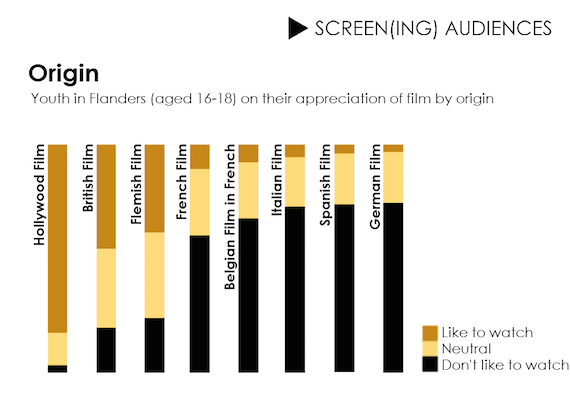 Despite a (theoretical) increase in access to a greater range of films, a traditional hierarchy in origin preferences is maintained amongst young people in contemporary Flanders. Most popular is Hollywood film, liked by 82% of all youth in Flanders. 39% like national (Flemish) film, while least popular is European film.

Only 10% say they like films in French (from either France or Wallonia, the French-speaking region of Belgium), while an even smaller share of around 4% like Spanish, Italian and German films.

If European films are generally unpopular, there is, however, one exception: British films. These English language films exceed Flemish film in popularity, with 46% of youth in Flanders liking these films. Nonetheless, this does not even concern half of all students.

The popularity of Hollywood thus remains undisputed. But what happens if we combine origin and screen through questioning youth on specific film titles? Or, what do we find if we measure practices, rather than preferences?

Hollywood film is well known across audiences and predominantly viewed on television or in the cinema, followed by the PC/laptop. Audiences are even more acquainted with Flemish film titles, but rarely watch these on any other screen than the television. Lastly, European film is not well known amongst youth in Flanders – despite many of the policy efforts by the European Union over the past decades.

With the exception of Intouchables (2011), known by half of the students, awareness of recent European film titles is limited to 2-8%. Even smaller numbers of Flemish young people had seen these films.

Interestingly, though, we do observe a shift in access. European films are mostly watched on the PC/laptop, followed by television. This means that content which is less accessible through traditional screens is being accessed in more contemporary ways, albeit by a limited number of high school students.

Today’s teens never listened to an ear-wrenching concert of buzzes and bleeps of a modem connection. Nor did they ever wait for over a day to download a film, only to find out that the single traceable file with subtitles was corrupted.

Yet, regardless of the (promise of) possibilities in content and screens that came with Web 2.0, the vast majority of young people would still prefer to watch a Hollywood film in the cinema. Or, second best, Hollywood or Flemish film on television. A few, though, will make use of contemporary possibilities in access by watching an occasional European film on their PC/laptop.

This finding underlines the importance of audience research in understanding media consumption. It is the only way to nuance between possibilities and practices.

Recensione: As Far as I Know