The new free report (download here) that European Audiovisual Observatory publishes on the origin of TV content in VOD catalogues in Europe report finds that:

• On a per episode share basis, European TV content accounts for 24% of all episodes found in TVOD catalogues and 21% of all episodes found in SVOD catalogues.
• National TV series episodes represented the majority of European TV episodes on pay per view VOD (TVOD) services (63%). They represent a minority of 19% of European episodes on subscription VOD (SVOD) services.
• Among non-European content, US content represents the vast majority on TVOD (92%) but a smaller share on SVOD (66%).

The increased consumption of TV content on VOD services has prompted the European Audiovisual Observatory, part of the Council of Europe in Strasbourg, and DG Connect of the European Commission to undertake a ground-breaking new report on the origins of TV content in VOD catalogues in the EU. This report - The Origin of TV content in VOD catalogues in Europe - was authored by Gilles Fontaine, Christian Grece and Marta Jimenez-Pumares, respectively Head of and Analysts within the Observatory's Department for Market Information.

The report covers 90 VOD country catalogues corresponding to 23 national VOD services/catalogues and 12 pan-European and multi-country services that sum up to 67 different catalogues:

- TVOD services with: Apple iTunes in 3 countries, Chili TV in 5 countries, Microsoft in 11 territories, Rakuten in 5 countries, SF Anytime with 3 catalogues, Google Play Series with one catalogue and Sony Playstation in one country.

1.      Breakdown of European TV content on TVOD versus SVOD

Figure 1 - Comparison of the origin of TV episodes in SVOD and TVOD, in %

National works represented the majority of European TV episodes on TVOD services (63%) but a minority of on SVOD services (19%). This shows the priority given by TVOD services to TV content well known to their customers and therefore with a strong commercial appeal, i.e. primarily national content, whereas SVOD services, due to their business model, can favour the discovery of new content. (Fig. 2 and 3) 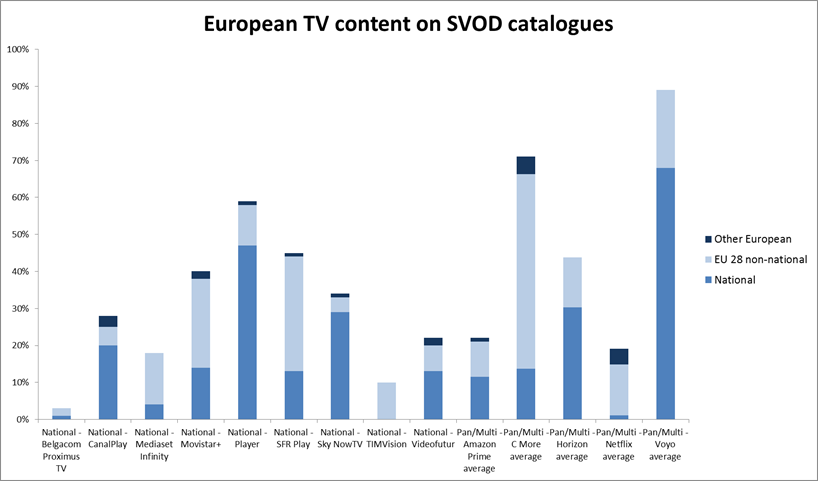 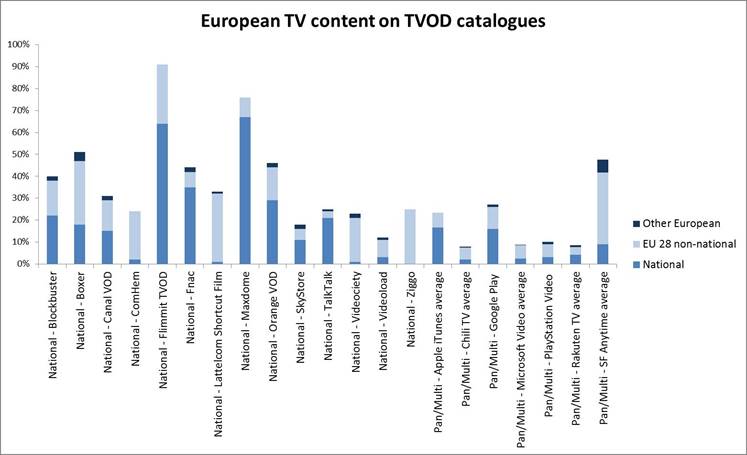 To which extent are the national catalogues of a pan-European or multi-country service similar? The Netflix and Apple iTunes catalogues are relatively homogeneous: On average, a given Netflix TV title or a given Apple iTunes title are available on average in half of the respectively 27 and 3 catalogues. SVOD pan-European services do indeed contribute to the circulation of programmes. (Table1)

Table 1 - Average number of catalogues where a title is available by origin, in units

3.       The composition of the pan-European and multi-country SVOD catalogues

o  Netflix (27 country catalogues) composes a global catalogue, with not only US and European content but a remarkably high share of content from other regions of the world and can be considered therefore as the first worldwide audiovisual network.

o  Horizon (4 country catalogues) is mainly developed to match the needs of national TV packagers and therefore relies on a high share of national content.

o  C More (3 country catalogues): is a regional service for Scandinavia. Its cumulated catalogue containes 74% of European content, a vast majority being non-national. Content from other Scandinavian countries accounts for 33% of this non-national content.

o  The two country catalogues of Amazon (Germany and the United Kingdom) included in the sample have very specific characteristics: both services have been initially developed on a national basis and then acquired by Amazon. 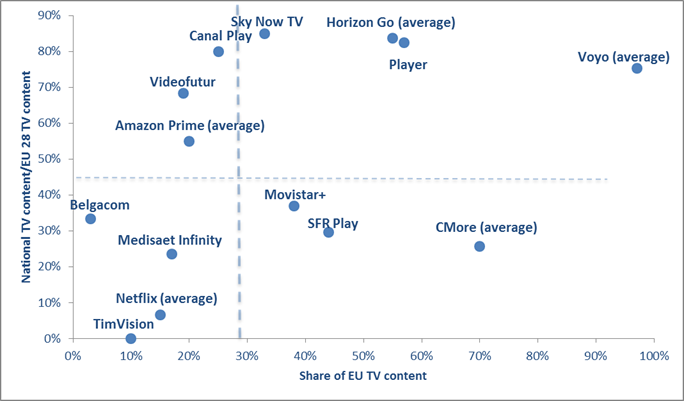 Recensione: Monty and the Street Party

Recensione: Kill It and Leave This Town

Recensione: Schlingensief - A Voice that Shook the Silence