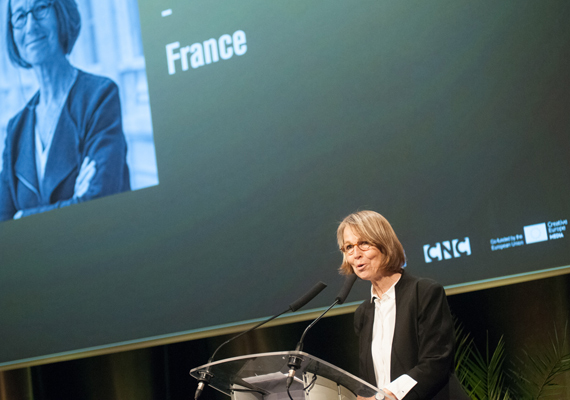 Thursday 3 May at the European Project and Talent Forum of Séries Mania was all about the first edition of the Lille Transatlantic Dialogues, a platform for exchange and discussion gathering together major political, corporate, creative and economic players from the TV and culture sectors in Europe and the USA. In the words of French Minister of Culture Françoise Nyssen, with its festival and market, Séries Mania in Lille now sits alongside Cannes, Clermont-Ferrand and Annecy on the international festival map. Nyssen was present at the event and addressed the audience, acknowledging the place that series now occupy in any given household in the digital era, and the whole new, consolidated yet diverse, daring and curious universe that the development of the sector has brought to life. She also paid homage to the creators as well as all those who make their work possible and take risks to accompany their creativity.

For Nyssen, whilst it has created new possibilities and enriched the cultural domain, the digital revolution nonetheless comes with tough challenges affecting creators, as together with it, a lawless no man's land came into existence, which allows, for instance, 42% of French viewers to watch content illegally, an appalling number that soars to 58% where young viewers are concerned – which the minister called a “heist” and which she is committed to fighting tooth and nail through domestic reforms, taking into account streaming as well as downloading as she implements a system that will force providers to block platforms infringing on copyright laws.

One priority for Nyssen is to counteract the fact that in the digital world, revenues bypass national borders and reward the content providers more than the creators, which, in her view, is not a model to aspire to, nor a viable one for that matter, as there can be no content without creators. The digital world can be full of opportunities, “provided it is regulated. In the cultural field,” says the minister, “permissiveness is not a condition for diversity, and lawlessness does not guarantee freedom.” Defending the creative sector therefore necessitates the kind of regulation that the EU has actively been producing for the past 30 years to protect the rights of authors and creators, regulation that needs constant adjustments and changes, now more than ever.

At the EU level, some important new rules concerning the audiovisual industry are currently in the final stages of the legislative debate, yet Europe is still fairly divided on the matter of the remuneration of creative work. The French Minister of Culture insists that revenues should be more fairly distributed between the digital platforms and the rights owner (an issue at the core of the proposed updates to the Audiovisual Media Services Directive), and content providers behaving like editors (even though YouTube and Facebook, for instance, claim that they only “host” content) should be obliged to earmark a share of the revenue generated to contribute to financing creation (the Copyright Directive). The Television Without Frontiers Directive should also be modified to include digital players.

Concerning the revision of the Audiovisual Media Services Directive, a great step forward – “historical” in fact, says Nyssen – was made just the day before the beginning of Séries Mania: 26 April marked two major victories in the aforementioned heated negotiations. Firstly, there was a reversal concerning the financing of creation: internet platforms will now have to apply the rules of the country where they are providing content, rather than those of the one in which they are established. Secondly, a quota was set, which Nyssen fought very hard to obtain given the liberal views of most of the other member states, and now not only 20% (as initially proposed), but 30% of the content on offer by VoD platforms available in Europe will have to be European.

“No savings should be made when it comes to creation,” sums up the minister. European writers should be supported, as should the diversity (of genres, formats and so on) that defines our constantly developing common cultural landscape.