Talking to Cineuropa, festival director José Rebordinos said, “We share a language, Spanish, with almost all of Latin America, and that makes us one big market. Working together makes us stronger. Our aim has always been to act as a window onto Latin American cinema for Europe; there are a lot of European producers who are keen to work in Latin America because there is a really quite strong legislative framework in place in some countries that makes them particularly attractive. Latin American cinema is also extremely varied, and very strong creatively. This means that filmmakers have a lot of choice, from conventional productions to more radical projects, with a huge spectrum in between. There is a lot of very interesting and original work being produced in Latin America at the moment.”

Since its origins, Films in Progress, the programme created by the San Sebastian International Film Festival in collaboration with Cinélatino Rencontres de Toulouse, has helped to finance the post-production phase of a number of Latin American films. This support has enabled the completion of some outstanding titles that have gone on to feature in the major international festivals, often scooping prestigious awards. This year, the winning film was Rey’s Education from Argentine debut director Santiago Esteves (read more here), selected from a shortlist featuring:

Santiago Esteves' Rey’s Education (La educación del Rey) (Argentina)
(Films in Progress Industry Award, CACI/Ibermedia TV Films in Progress Award)
Escaping from his criminal baptism, Reynaldo Galíndez, alias “Rey”, lands in the patio of the house inhabited by Carlos Vargas, a retired security guard. Vargas proposes a deal: the young boy will repair the damage caused to his home when falling in return for not being handed over to the police. The lessons given to the teenager by the old guard will give rise to a relationship not unlike the old legends of educating a king (for the “Rey” of his name, meaning “king”). La película, escrita por Juan Manuel Bordón junto al propio Esteves, está producida por Ezequiel Pierri para 13 Conejos (Argentina). 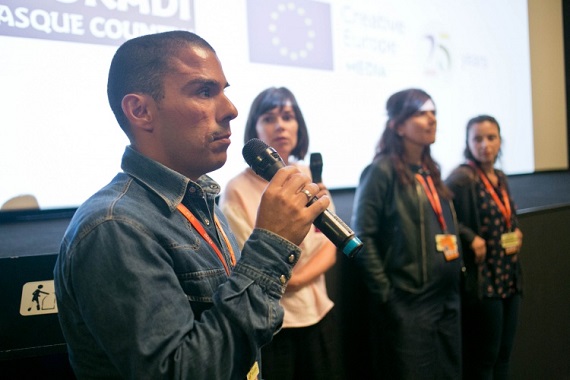 Introduction of Silence of the Wind (© Iñigo Ibáñez / SSIFF)

Álvaro Aponte-Centeno's Silence of the Wind (El silencio del viento) (Puerto Rico/Dominican Republic/France)
El silencio del viento is the story of a man who tries to get over his sister’s death but can’t because he has to continue working at his illegal business of bringing undocumented immigrants from the Dominican Republic to Puerto Rico. Written by Aponte-Centeno, the film is produced by Maite Rivera Carbonell for Quenepa Producciones (Puerto Rico), Fernando Martinez Sosa for Balsié Guanabana Macuto (Dominican Republic) and Samuel Chauvin for Promenades Films (France). 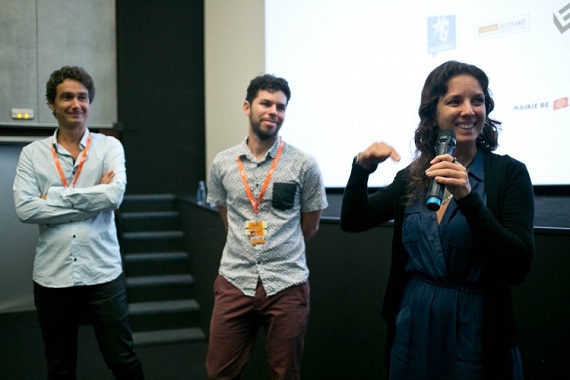 Gustavo Rondón Córdova's The Family (La familia) (Venezuela/Chile/Norway)
Andrés and his son Pedro live in a working district of Caracas and hardly ever see one another. While Andrés fills his time doing different jobs, Pedro wanders the streets playing with his friends and learning from the violent atmosphere around him. During a ball game, Pedro fights with a boy, injuring him with a bottle. Andrés is embarrassed when he hears what has happened and decides to flee from the district in search of refuge. This situation will expose a father incapable of controlling his teenage son, but it will also involuntarily bring them closer than they have ever been. Written by Córdova, the film is produced by Natalia Machado Fuenmayor for La Pandilla Producciones (Venezuela), Marianela Illas for Cine Cercano / Películas Prescindibles (Venezuela), Rodolfo Cova for Factor RH (Venezuela), Alvaro de la Barra for Avila Films (Chile) and Dag Hoel for Dag Hoel Filmprod AS (Norway).

Adrián Biniez's The Waves (Las olas) (Uruguay/Argentina)
Exhausted on leaving work, Alfonso goes to the beach and dives into the sea. Coming to the surface, he finds himself on another beach, in another time. His parents are waiting for him, calling to him from the water’s edge. Alfonso sees and understands everything from his adult’s body, even if they treat him like an 11 year old. This is the beginning of a fantastic voyage through the different holidays in his life, where the situations come one after the other with no chronological order, interrupting with a tone of intimacy and entertaining nostalgia his meetings with girlfriends, teenage and childhood pals, his daughter and his loneliness. Written by Biniez, the film is produced by Agustina Chiarino for Mutante Cine (Uruguay) and Nicolás Avruj for Campo Cine (Argentina).

Alexandra Latishev Salazar's Medea (Costa Rica/Chile)
María José is 25. Her life moves back and forth between the monotony of class at the university, her eternally distant parents and a couple of alternative spaces where she can explore her own and others’ limits. One day she meets Javier, a boy she really likes and tries to have a relationship with, but her behaviour starts changing radically. In fact she’s a few months into her pregnancy and no one knows. Written by Salazar, the film is also produced by herself for La Linterna Films (Costa Rica), Paz Fábrega Raventós for Temporal Films (Costa Rica) and Cynthia García Calvo fir Grita Medios (Chile).

Jaime Osorio Márquez's A Great Dragon (Un gran dragón) (Colombia)
Marcos, a withdrawn park ranger, sees the fragile balance achieved in his isolation collapse with the arrival of a couple of biologists investing strange bird deaths. Unfortunately, the desire and envy for normality represented by the couple awaken the monster he has been trying to control. His face, his legs and his arms don’t belong to him and as the desperation becomes incontrollable, he can only see one way out: mutilation. Written by Márquez, the film is produced by Jorge Forero for Burning Blue (Colombia).

“Films in Progress is one of the most evocative names in the world of film; it has always made me think of continuity and growth, which is something we all aspire to in this industry,” commented Esteves after being presented with the Industry Award. The prize means that production companies Daniel Goldstein, Deluxe Spain, Dolby Iberia, Laserfilm Cine and Video, Nephilim Producciones, No Problem Sonido and Wanda Visión will take on the post-production tasks of the film, ultimately creating a Digital Cinema Package (DCP) with English subtitles, as well as ensuring its distribution in Spain. 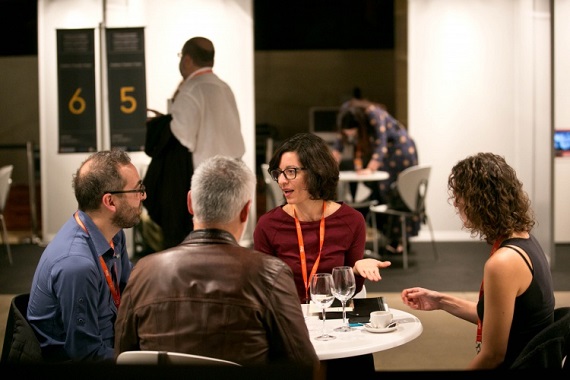 Italian producer Alessandro Amato, from Dispàrte, present at the forum with one of the European-Latin American projects, Hogar, talks about the importance of the event for their aims: "Our project is a natural European-Latin America coproduction, it is an Italian-Argentinian story set in Argentina and written and directed by an Italian filmmaker based in Buenos Aires." Amato adds, "Our needs belong to both sides of the ocean, and we were here to look for the third possible country to cover the last 20% of the budget and eventually share some creative crew members and or set part of the post production." "I think the co-production agreements such as Argentina-Italy and Brazil-Italy are fundamental, both in development and in production. They are a great impulse that invite producers to open their minds to new forms of producing. We are also happy that Italy entered in the Ibermedia programme. We love the idea about talking to a wide public both American and European believing cinema is an international language," he explains. 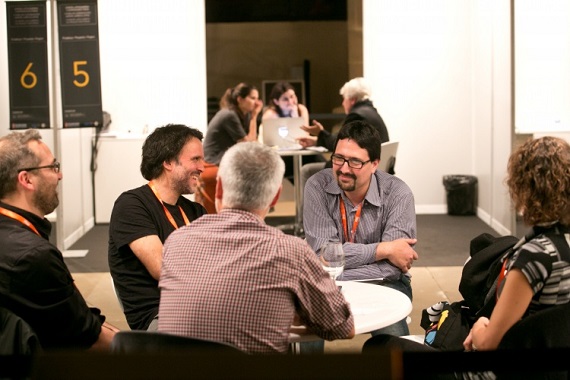 With the curtain now drawn on the 2016 Festival, The Industry Club is looking to the future, with plans to strengthen and expand its role as a bridge between the European and Latin American film industries with new initiatives, particularly one called Focus on Glocal Cinema (read more here). “Spanish is a common language that unites us all, but we want to open up the field to projects being made in minority languages, like Basque, which is very different but can still serve to connect us with others. With “glocal”, we are working in European countries where films are being made in non-hegemonic languages. The idea is to launch a new, “ultra” version of Films in Progress that will create a space for works-in-progress in these other languages.”

The Industry Club also hosted the European Film Forum, this year dedicated to Audiences in Motion (read more here) and the 12th Lau Haizetera Documentary Co-Production Forum, in collaboration with IBAIA (the Association of Independent Audiovisual Production Companies of the Basque Country).