Just like the work by Sabri Louatah, a modern version of the 19th-century multi-tome novel, which the series is an adaptation of, Savages is a sprawling social and political fresco, a human comedy that confronts French society with all its divides and contradictions. What makes France the country it is today? What does it mean to be French? And what of that much-vaunted concept of "living together"? The audience at Are You Series?, the Brussels-based festival that airs the best that the small screen has to offer, but on the big screen, will be pondering these questions this weekend, thanks to filmmaker Rebecca Zlotowski, the director behind this adaptation.

On the eve of the second round of the presidential election, a landmark date in national politics, the country holds its breath as France is poised to elect its first-ever president to have previously been an immigrant in the nation. The country shudders, agitated just as much by this promise of a new dawn as it is by the barely concealed racism exhibited by part of the population. Lady luck seems to be smiling upon Fouad Nerrouche, a popular young actor who stars in a hugely successful TV series and who is also engaged to Jasmine, the daughter of the favourite candidate in the presidential election, Idder Chaouch. But while out mingling with the crowds, Chaouch is targeted by a sniper – a gunman whom Fouad knows only too well…

With great skill, the director paints a portrait of the different, and constantly interweaving, members of these two families – that of the president, and the Nerrouche family, in which two brothers are facing off: Fouad, the actor who’s made it big, a social success story, and Nazir, the unsettling gang leader previously convicted for inciting racial hatred.

The story stirs up some significant fears. Festering terrorism and racism are corrupting a country in a state of emergency, and yet there is definitely still hope for a more inclusive society. The series turns its attention to minorities that it treats as majorities. While the tale trundles out various different situations full of unsubtle clichés concerning French people who got into the country by immigrating from North Africa – inevitably either religious or atheists, integrated or communitarian, extremists or seemingly indifferent – the characters that bear the brunt of the contradictions in society, and indeed their own contradictions, actually break the stereotypes and create fictional figures fuelled by complexity and diversity.

"Evil lurks deep down in every one of us. We are capable of the very best and the very worst. We are the most civilised of men, and complete and utter savages." Before uttering these words during his swearing-in speech, Idder Chaouch (an impressive Roschdy Zem as a kind of French Barack Obama) endures, over the course of just a few days, a personal and political whirlwind that functions as a national identity crisis afflicting the entire country. These contradictions, as personal as they are societal, are brought to fever pitch by the fratricidal conflict between Fouad and Nazir. The dichotomies are never-ending in this fractured France, pitting the upper class against the lower, Paris against the provinces, the city centre against the abandoned industrial sites, believers against non-believers, and “native” French people paralysed by their fear of anything foreign against a perfect blend of mixed-race France.

Fully aware of the power of fiction when it comes to enriching imaginations, as well as its capacity to pre-empt and even encourage changes in sociological paradigms, the director delivers an epic, lyrical and ultra-modern story. The series represents an all-encompassing attempt to deconstruct stereotypes, from its provocative title right down to the most minor supporting characters.

Just like the young female president in Baron Noir (or US series such as 24 and West Wing), the immigrant president in Savages offers an exemplary fictional character in a French-language audiovisual landscape that is still struggling to reflect the diversity found within its population. 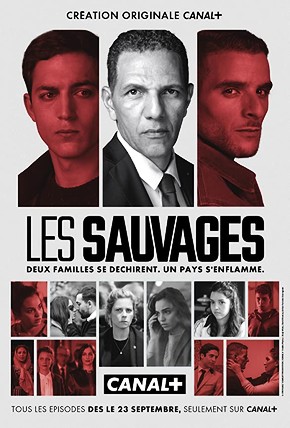 Aelrun Goette sta preparando In a Land That no Longer Exists

Recensione: The Father Who Moves Mountains