On Sunday 29 March, ATRESplayer Premium (Atresmedia’s new paid-subscription platform) premiered the pilot episode of Veneno, the eagerly awaited series written, directed and produced by the “two Javis” (Javier Calvo and Javier Ambrossi), a duo of filmmakers who became a pop phenomenon thanks to the successful musical stage production that they went on to adapt for the big screen in the form of Holy Camp! [+leggi anche:
recensione
trailer
intervista: Javier Calvo e Javier Ambr…
scheda film] (starring Belén Cuesta, Anna Castillo and Macarena García). Furthermore, their series Paquita Salas ended up confirming their status as the directorial duo of the hour, transforming them into something akin to the artistic grandsons of Pedro Almodóvar, albeit without the Manchegan director’s depth of storyline or emotional intensity.

Based on the book ¡Digo! Ni puta ni santa by Valeria Vegas, the series Veneno – the shoot for which has been put on hold owing to the health crisis created by the coronavirus pandemic that’s not only afflicting Europe – was billed as the audiovisual biography of Cristina Ortiz, the first transsexual (who passed away three years ago) who appeared on television (on a very successful late-night talk show and without mincing her words) to talk about her condition and her profession: prostitution. This entertaining, cheeky, provocative and alluring person, known as “La Veneno”, immediately became a phenomenon, midway between the “freaks” that were paraded around by that sensationalistic TV programme and the demands being made by the LGBTQ+ scene.

Surprisingly, in this series by the two Javis, it is the ins and outs of that late-1990s TV show that are transformed into the beating heart of its first episode, in which La Veneno (played by King Jedet, Daniela Santiago and Isabel Torres during the different stages of her life) almost becomes a supporting character, making heavenly appearances in the midst of hellishly violent and/or nocturnal scenes (she does so on two occasions, like a Jessica Rabbit made of flesh and blood, swaying her hips and lit up by car headlights). Also, after skipping forward in time to 2006 and shifting the action to the city of Valencia, the show zooms in on the early-life crisis of a boy who wants to be a girl: namely, the aforementioned future author of La Veneno’s autobiography, Valeria Vegas.

With its aesthetic reminiscent of JA Bayona’s tear-jerkers, its religious kind of aura turning La Veneno into something akin to a miraculous virgin, and its especially poorly shot and acted scenes (particularly the ones that take place in Madrid’s Parque del Oeste, where prostitution was practised for decades), Veneno steers clear of all the official story’s seediness, rawness, marginalisation and misfortune, and ends up becoming a mawkish vindication of transsexuality, diversity and freedom, aimed squarely at mainstream audiences.

The two Javis have therefore naively squandered all the transgressive, critical and revolutionary potential of this outstanding and unique character by mythicising her with beatitude and by relegating her to a background role. They thus prompt the viewer to ask themselves, while watching this first episode, just what other, braver filmmakers – or perhaps those less blinded by their own self-indulgent faith – might have been able to do with this complex and brutal story, such was the life of La Veneno and all that surrounded her.

Veneno – a series of eight 50-minute episodes – is a production by Atresmedia Televisión and Suma Latina. Its cast boasts well-known names such as Lola Dueñas, Elvira Mínguez, Goya Toledo, Israel Elejalde and Jordi Vilches, who are flanked by fresh faces such as Isabel Torres, Daniela Santiago and the very amusing Paca la Piraña. 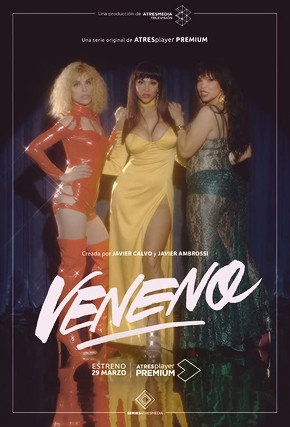 Recensione: And Tomorrow We Will Be Dead