Although it’s hard to believe, 2020 is still offering up some pleasant surprises, as we’ve now had two outstanding Spanish series (and are eagerly awaiting the result of the third: 30 Coins by Álex de la Iglesia, which will shortly land at the Sitges Film Festival after getting an airing at Venice). The first is Riot Police [+leggi anche:
recensione
intervista: Rodrigo Sorogoyen
scheda series], which Rodrigo Sorogoyen directed and produced for Movistar+, and which will be presented at the 68th San Sebastián Film Festival; the second, which is also being premiered at the Basque gathering, is Patria, created and written by Aitor Gabilondo – based on the book of the same name by Fernando Aramburu – for HBO.

Those of us who have been loyally attending this magnificent festival for years can still remember the social unrest, the demonstrations and the scuffles that occurred in its host city when the terrorist group ETA was inflicting its tyranny of terror on the whole of Spain. Even some of the festival’s ceremonies and gala events were disrupted by raised voices, placards or hooded figures bursting onto the stage. The fact that this series consisting of eight episodes (and lasting 428 minutes in total) – which was directed in equal parts by Félix Viscarret and Óscar Pedraza – is being premiered here is bound to spark all kinds of reactions, without a doubt.

What it portrays goes far beyond the anxiety and the sense of unease that any given visitor to the Basque Country would feel at that time: it shows how its inhabitants lived (or merely survived) under the pressures of violence, extortion and harassment, how friendships and other relationships were torn apart, how basic human rights were trampled upon, and how the perpetrators plumbed the very depths of unbearable dehumanisation. This magnificent series thus depicts more than half a century of pain, grief, wounds, silence, lies and fear by focusing on two families: one that falls victim to an attack and another – the first family’s neighbours – that harbours a terrorist in its ranks.

With some beautiful opening credits, in which raindrops mingle with spilled blood, and some brief flashes of understated and classy humour to alleviate the drama, the story follows the character of Bittori (played by the ever-magnificent Elena Irureta, a sure-fire candidate for a plethora of acting awards in the months to come, likely battling it out with the other lead, Ane Gabarain), who, the day on which ETA announces it is handing over its weapons (after killing 855 people and leaving hundreds more wounded), returns to her home town in search of answers. She wants to know who killed her husband and tragically scarred her life – and those of her children – forever.

Constantly jumping around in time, the narrative of the series reconstructs that crime (the scene of the woman all alone as she begs for help will make your hair stand on end), provides an in-depth look at the stifling atmosphere that pervaded the Basque Country, shows the different ways in which humans react to unforgivable brutality, and proves to be a brave, hard-hitting and very necessary plea for the rejection of violence – that despicable attitude that does nothing but poison everything around it.

Patria is a production by HBO Nordic AB, which is also in charge of its international sales. It is set to be released on HBO España on 27 September. 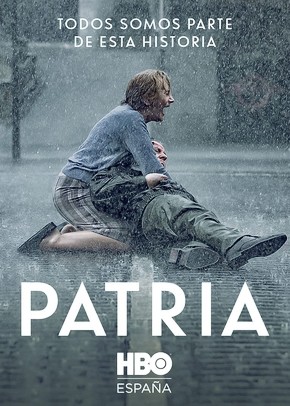