If it didn’t last a total of 304 minutes and it weren’t a series divided into half a dozen episodes – each one named after one of its characters – Riot Police [+leggi anche:
intervista: Rodrigo Sorogoyen
scheda series], helmed with nerves of steel and some serious guts by Rodrigo Sorogoyen, would not only be able to compete for the Golden Shell at the 68th San Sebastián International Film Festival, where it is presently being presented, but it would also be in with a very good chance of winning a prize.

That’s because, and let’s make this clear from the outset, it knocks you out. Cold. Built on a hard-as-nails screenplay penned by the director and his regular partner at the keyboard Isabel Peña, and with the addition of Eduardo Villanueva to enhance the writing team, it begins as a case of abuse of authority and ends up veering into a whirlwind of violence and corruption, with a frantic pace and a brutal mise-en-scène.

Buoyed by a powerful soundtrack by Olivier Arson and some spritely editing by Alberto del Campo, the series sticks like beads of sweat to the uniforms of a squad of policemen, who will have to struggle with their consciences as they comply with several dubious orders that they’re not sure will be effective. They thus become embroiled in a conflict that will be investigated by the internal affairs department and that will be nothing more than a thread they will follow, leading them to uncover a stinking and corrupt bigger picture.

In addition, actors Vicky Luengo (in the role of a Little Red Riding Hood forced to contend with a pack of wild animals), Raúl Arévalo (who outdoes himself with every new performance) and Roberto Álamo (sensitive behind his rugged facade) – in perfect harmony with Álex García, Raúl Prieto, Patrick Criado and a superb Hovik Keuchkerian – only serve to enhance one of the best titles in Spanish cinema this year, regardless of whether we’re talking about a short, a feature or a series made for a streaming platform.

Riot Police is a production by Movistar + (which will air it on 16 October), in conjunction with The Lab and Caballo Films. 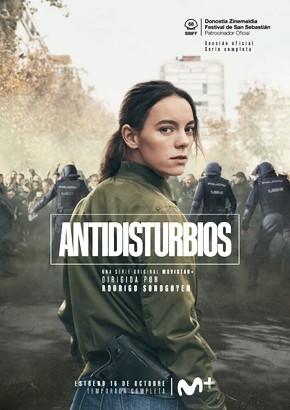