Catalan thesp Candela Peña plays Judge Candela in the second season of Hierro [+leggi anche:
intervista: Jorge Coira - Regista di H…
intervista: Olivier Wotling
scheda series], just as she did two years ago in the first series, which scooped the Feroz Awards for Best Drama Series and Best Actress. Set on the titular small island nestled in the Canaries, this second instalment, revolving around the obstacles and difficulties that this woman must grapple with in order to bring justice to a such a closed-minded place, does what it sets out to achieve: keep up the audience’s interest and entertain them. Its two secret weapons for doing so are the sheer beauty of the natural surroundings it unfolds in and the presence of an actress who is able to make the impossible possible (we only need recall how she lends so much credibility to the peculiar idea set forth by Rosa’s Wedding [+leggi anche:
recensione
trailer
scheda film], which secured her a Goya nomination to boot).

Flanked once again by Argentinian thesp Darío Grandinetti (in the shoes of a character that ends up losing momentum somewhat in these six new episodes), Swedish-Spanish actor Matías Varela (a real revelation whom we would do well to keep a close eye on), Aina Clotet, Ciro Miró and a surprising Enrique Alcides, who is difficult to recognise as he breathes life into a shady but alluring character, the judge twice named Candela will take on a complicated new case that is bristling with enough mystery to keep us hooked, courtesy of Pepe Coira, the creator of both this thriller series and its predecessor.

In addition, the thorny issue of the custody of minors, something that many separated couples fight over tirelessly, is also up for discussion here. And it’s here that this woman forever perched atop high heels and with a chronically ill son will have to learn how to keep her personal life separate from her professional life, and objectivity separate from emotionality. Because those same doubts that rain down on the protagonist will also cause the viewer to question some of their own values and judgements.

This is the biggest plot hook of a storyline that gradually fills up – and not always with the same degree of effectiveness – with corruption and scams (tourism-related and urban speculation remains one of the great evils stalking Spain), as well as with tense moments generated thanks to a slick – albeit not a particularly original – mise-en-scène.

After six hours of running time that – as is the case with virtually all series today – could easily have been pared down to three without diminishing its plausibility, let alone its pace, peppered with legal scenes (interrogations, statements, arrests, inspections…), a glut of panoramic island vistas (are drones on special offer?) and the odd folkloric picture postcard (this island in fact won the Best European Film Location Award in 2019 – see the news), in the end, it’s the overarching topic of this second season of Hierro that really stands out from the rest, just like it did in the first: namely, the complexity, hazards and difficulties inherent in meting out justice – heels or no heels.

The second season of Hierro is an original six-episode series (each instalment lasting 50 minutes) by Movistar+, directed by Jorge Coira (read the interview), and co-produced with Portocabo, ARTE France and Atlantique Productions. Movistar+ will start airing it on 19 February. 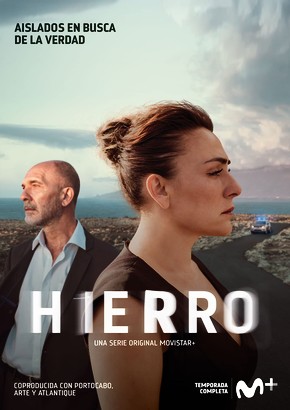 Recensione: Sermon to the Fish