Recensione: The Phantom of the Open

Mark Rylance in The Phantom of the Open

Mark Rylance – who has every acting gong imaginable on his mantelpiece – is a jolly good sport to put his considerable talent to use playing a character with no talent at all. With all due respect to Joachim Trier, The Phantom of the Open should really be entitled The Worst Golfer in the World. Whilst Rylance’s character, real-life pensioner Maurice Flitcroft – perhaps a troll (in the modern, internet-associated sense) avant la lettre – is especially woeful at his newly acquired hobby, Craig Roberts’ film itself is uninspiring in a different sense, aiming for the upbeat aura of the Ealing comedies, but landing on the green as yet another amiable but bland feel-good Brit-flick, the kind that the country’s film industry produces as a stiff reflex. The film world-premiered this week as a special presentation at the BFI London Film Festival.

This film’s main screenwriter, Simon Farnaby, is also behind the much-loved Paddington [+leggi anche:
trailer
making of
scheda film] films, and at The Phantom of the Open’s best, it shares with them a similar anti-snob mentality, and a desire to celebrate the best of the national character – the copious cups of tea, the dry humour – without drifting into a reactionary sentiment or overt patriotism. Although Roberts’ direction gets many easy yet effective gags out of misdirected golf swings and bystanders holding back peals of laughter as Flitcroft misses a hole from two feet out, the character’s arc isn’t powerful or even realistic enough: the film gives the most emotional conflict to Flitcroft’s stepson Mike (Jake Davies), who works at the same Barrow-in-Furness shipyard as his dad, but has transitioned to a more white-collar management job. Rylance nails the slow-witted little smiles required for his character, yet what would really have made this film is if he had got a proper teary-eyed monologue. Or danced – his other twin sons are Northern Soul DJs.

We’re a few decades onnow from a certain golden age of British public broadcasting: the mid-1970s period when TVs had only three channels, but could provide an uncanny and perspective-widening view of the world. Whereas some had their minds reorientated by Top of the Pops (the film is set in 1976, when a new generation of British youth music was about to explode), on one quiet week night after work at the shipyard, Maurice serendipitously flicks the channel onto the US Open golf tournament. A Big Lebowski-esque stop-motion fantasy sequence then shows him whisking through the sky like a well-struck golf ball. If any film can visualise for us what the converted see in the sport…

This kicks off an amusing, if repetitive, structure, where Flitcroft will apply (and lie) on his application as a self-employed professional and enter the British Open, typically held in Scotland. He flunks out hilariously, but the film leaves it ambiguous as to whether it’s a sly little prank against the snobs like Rhys Ifans’ tournament executive or if, like in the hallucination, hitting the putt is a release from his steady, working-class existence. To note: when Donald Trump visited the UK, he was often photographed at his own Scottish golf course, Turnberry – one could even imagine him on the sidelines as an ally to Ifans’ character. These richer associations are there for The Phantom of the Open to exploit, but the film is content with its chirpy, crowd-pleasing mandate.

The Phantom of the Open is a UK production staged by Baby Cow films, BBC Films and Water & Power Productions, in association with the BFI. Cornerstone Films is the world sales agent.

altro su: The Phantom of the Open

Recensione: The Phantom of the Open 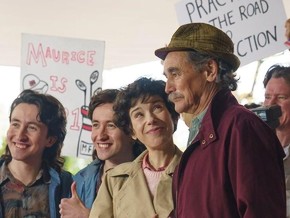 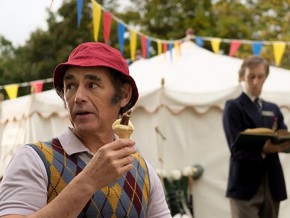