Julian Waldner in Chasing the Line

“Did you always want to become famous?” Franz Klammer’s girlfriend, Eva (Valerie Huber), asks the freshly award-winning Olympic gold medallist. “Actually,” Klammer (Julian Waldner) responds with a smirk, “I just always wanted to ski.” On 5 February 1976, the Austrian ski racer prompted a wave of exhilaration across the alpine nation when he won the downhill race against the heavily favoured Swiss skier Bernhard Russi at the 1976 Winter Olympics in Innsbruck. He was already a legend in the making back then, and director Andreas Schmied’s biopic Chasing the Line focuses on the five days leading up to the contest. The film goes on general release in its home country on 28 October, courtesy of Constantin Film Verleih.

Packed with thrilling race sequences in the white powder, sleek, colourful cars and winter outfits, as well as nostalgia-inducing analogue equipment, the movie evokes the pleasure of a feel-good time capsule and is a testament to one of Austria’s best. But the actual narrative focus lies elsewhere: the movie examines the immense pressure placed on the 22-year-old. He had the expectations of a whole nation upon him, plus a marketing campaign that his ski supplier, Fischer, kept pushing repeatedly.

Equipping him with an expensive, new pair of skis, whose “groundbreaking” design Klammer claims “has a hole. Like cheese”, there is an element of conflict embedded in the story, which rarely makes for good viewing in a sports drama. Most biopics focus on a lifetime of overcoming the odds, as well as the ultimate showdown with an opponent from a rival country. Not so this one.

Chasing the Line not only forgoes the popular trope of “pausing before the climax to have a flashback of one’s life”; it also narrows the timeline down to only a few days, like recent sports films such as Borg/McEnroe [+leggi anche:
recensione
trailer
scheda film] or Battle of the Sexes (2017), making for a more focused and compelling drama. At its centre is the often-overlooked question of sports equipment versus athlete. What makes a winner a winner? His pricey supplier, or his skills and guts?

More familiar is the inclusion of the sickly sweet love story between Franz and his girlfriend, Eva. Serving as his rock during these five exceptional days, Eva herself has to learn how to be not only the girlfriend of Franz, but also the woman by the side of celebrity Klammer, without losing her own identity. This is a noble and empowering move in the narrative. It does, however, sometimes feels too forced and distracts us from the main story. The question of whether Eva will take her university exam on the day of the race or go to Innsbruck to cheer Franz on seems like a conflict that is dead on arrival.

Waldner not only provides his portrayal of fellow Carinthian Klammer with the proper dialect, but he also skilfully channels his inner strife, his fear as well as his confidence in winning. In a way, Chasing the Line works as a coming-of-age drama, which addresses not only the commercialisation of sport, but also Klammer’s journey in forging his own identity as an athlete. The new skis, as well as the shiny golden ski suit, will famously stay in the locker, as the young man proves that it is the human element that makes him a winner. And as he successfully belts over the finish line, so does the movie. It’s a charming and relevant addition to the genre. 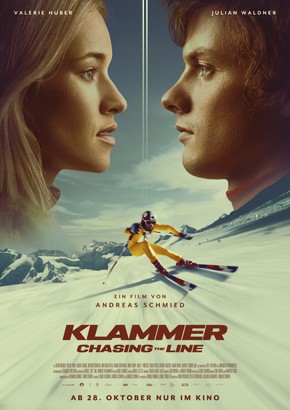