Recensione: A Custom of the Sea

“It all began in the town of Porto Maurizio,” is how director Fabrizio Polpettini begins A Custom of the Sea [+leggi anche:
trailer
scheda film]. What follows is a charming analogue road trip around the Mediterranean; a patchwork of archive footage and staged encounters along the way, tied together by its serious topics of slavery, migration and colonialism. And throw in a disarming sense of humour to go with it. The playful reflections on these historical issues manage to connect seamlessly with today’s hot topics. A Custom of the Sea had its world premiere at the 64th DOK Leipzig, in the International Competition.

Polpettini’s motive for embarking on such a road trip is a historical one, stretching back to the time when North African pirates, or corsairs, ruled the sea. Together with friends Roman and Amir, who are, as luck would have it, from both sides of the Mediterranean, he wants to investigate the capturing of Europeans as slaves. His starting point is tales from his childhood, and as they set out, they stumble upon all sorts of accounts that establish the Mediterranean as a barrier between cultures. In one scene, Amir and Roman make this quite explicit, as they are sitting somewhere on the Ligurian coast, talking about Roman visiting Algiers in order to attend Amir’s wedding the following week. It spirals into a sportful discussion on legal and illegal migration. The proposal that Roman would travel illegally, which is his only option since it is too short notice to obtain a visa, somehow seems ridiculous in this context, yet it is something that people do on a regular basis. It confronts us with prejudice. Roman, as a European, wouldn’t dare think of it. But why is harga, as Amir calls it, which translates as burning your official documents and smuggling yourself across, supposed to be a one-way street? Just after the conversation, they stand in front of the water, Roman dressed as a slave and Amir as a corsair.

These stories of raids by the corsairs still echo through Italian culture along the coast. There are sayings in the language which hint at these stories, talking about how the corsairs will come if you misbehave. As is to be suspected, they resonate with the present-day refugee crisis and the questions that arise along with it. This light-hearted film serves as an instrument to diffuse the discourse, although not in an oppositional sense. It investigates how stories are constructed and, more importantly, how they’re used to construct enemies.

Take the French invasion of Algeria, for example. As the film suggests, they used the European slaves as an excuse to invade the country, though the written accounts only talk of 120 liberated slaves, of whom only a single person was indeed French. The director then draws a parallel with extremism coming from the Muslim world after 9/11 – and we all know what happened there in terms of constructing a narrative.

All in all, the combination of archive footage and the analogue-shot scenes with Amir and Roman create a pleasant and cinematic whole. Different sources, such as old films with Yul Brynner, a Libyan series about the Americans in the First Barbary War and an old Italian television report depicting rituals to keep the pirates away, form a loosely told, but still rich and coherent storyline. It manages to point out the issues of colonialism, religious differences and Eurocentrism, and how they are still very much alive today.

A Custom of the Sea is a French production staged by Fabrizio Polpettini and co-produced by Pierre-André Belin.

altro su: A Custom of the Sea

Recensione: A Custom of the Sea 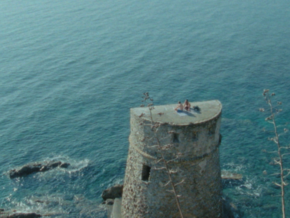