"On the other side of the divide. I’m looking for someone who’s disappeared." Sometimes, when our lives seem to be going round in circles and when we’re wrestling in the depths, incapable of overcoming our losses, the slightest exit route which opens up before us can help to lift us out of ourselves, to shed light on our torments, to teach us that our pain resonates in other dimensions and that the quest for otherness (as absurd as it first seems, fuelled by hypotheses and imaginary projections) harbours the potential to bring new sunshine into our sombre lives. Such is the guiding thread of What If Tomorrow, the new feature film directed by humanist Fabienne Godet, which was screened in a French premiere at the 22nd Arras Film Festival and which provided Julie Moulier (who turned countless heads in the filmmaker’s previous opus Our Wonderful Lives [+leggi anche:
recensione
trailer
intervista: Fabienne Godet
scheda film] and more recently in Undercover [+leggi anche:
recensione
trailer
intervista: Thierry de Peretti
scheda film]) with an opportunity to flaunt her extensive acting skills and immense physical sensitivity.

"How long are you going to go on like this? You’ve been drunk for days. Get that bloke out of your head!" Lena (Belgium’s Lucie Debay) has a lot to worry about when it comes to her translator friend Esther (Julie Moulier) who is slowly but surely destroying herself, either collapsing in the gutter and ending up in hospital or lying prostrate in her apartment, racking up all-nighters and obsessively re-reading a break-up letter.

But it’s a stranger’s personal diary which is randomly left on her doorstep which provides Esther with the impetus she needs to slowly find her way back to the surface. This account takes Esther back to the summer of 2001 in Toulouse as she reads the words of a young and desperate woman who has survived a motorbike accident which has stolen the love of her life ("going on with you, rediscovering the world but the world is empty without you… My body was no longer there, as if it had been erased. I wanted to die. I should have died with you"). These confessions intrigue Esther (who has never set foot in Toulouse) who, with Lena’s encouragement, embarks upon a long-distance investigation before seeking out this stranger in person, feeling increasingly obsessed with this person who has disappeared without a trace and whose states of mind chime with her own empty life. Following tenuous tracks dotted with cryptic clues, Esther sets off for Spain and even travels as far as Lisbon, notably crossing paths with an enigmatic hitchhiker (Arnaud Valois) - a handsome Hermès come deus ex machina who also has a part to play in this extended circular trajectory.

Lending her film the form of an open letter which is also open to interpretation, Fabienne Godet lays human vulnerability bare in all its emotional, solitary and psychological trials. She offers up a map of human malaise and survival aids (imagination, friendship, side roads, slowly stripping back to the essentials, sunshine, new horizons, etc.) in the guise of a circumstantial crime drama (whose clever yet slightly controlled screenplay was written by the director alongside Claire Mercier and Franck Vassal, in association with Sophie Fillières). It’s a strange road movie which looks to understand the process of accepting loss and human mortality, and which displays a profound understanding of the heart’s power to build bridges and to reinvent itself in other forms and other contexts.

Produced by Le Bureau, What If Tomorrow will be distributed in French cinemas on 8 December, courtesy of Jour2Fête. International sales are in the hands of The Bureau Sales.

altro su: What If Tomorrow 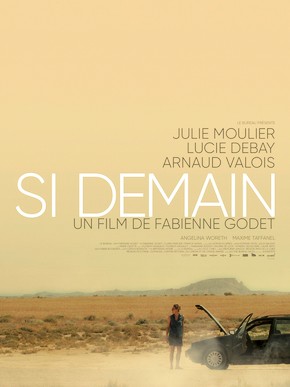