One summer, a family takes a trip around the Mediterranean on a cruise ship called Fantasía. This is the premise for the new documentary film by actor and director Aitor Merino (San Sebastián, 1972), with the same name as the ship, presented at the Bertoko Begiradak – Basque Perspectives Section of the 63rd Edition of Zinebi, International Festival of Documentaries and Short Films of Bilbao.

In these opening scenes we see the director’s family make their way to the port by taxi: his retired parents and his sister (actor and film maker Amaia Merino, scriptwriter for the film alongside her brother, Ainhoa Andraka and Zuri Goikoetxea). During the trip, the Basque film director follows them with his camera, capturing and recording what they do, what they say, what they think and feel. There is also the scenery, the views of the sea. These images of the holiday are mixed with pictures from the past, with the family’s daily life, photographs telling their private story, their conflicts, past and present.

The author Lucia Berlin said that what touches us in fiction is not that we can identify with a situation, but rather that we recognise the truth in it. Fantasía is a personal narrative, but in this way, one of its greatest virtues is making something so subjective into something so public, reflecting feelings, emotions, thoughts, attitudes and conflicts that we can all recognise. In the good times and the bad times we can all see ourselves in the family’s common joy and sadness. There are issues presented in the film that may make us feel closer to a certain age –clashes over growing old, death as a major part of life, knowing that we will all inevitably lose the people that we love–, but also other inherent parts of human existence: the meaning of family, the complexities of close relationships, the weight of memories, the passing of time, the meaning of the past, all those things deep down inside us, that show on our faces, the painful yet sometimes fun journey of life.

In a simple way, using the metaphor of a journey and the subjective reconstruction of parts of the director’s own life –and from that simplicity and first-hand subjectivity comes the truth of this film– Merino completes an enlightened exercise in the creation of a space for sentimental memory, an emotive cinematographic document –somewhere between confession and memoir– of that private past. The film is therefore in some ways an elegy, a record of that dearly-loved universe that the author knows he will lose one day, a declaration to those loved-ones who he knows are mortal.

With this, the testimonial nature of the film leads to another of the interesting aspects of this documentary: a reflection on the photographic nature of film. In Merino’s perspective there lies that concept of film found in vanguard cinema, in directors such as Jonas Mekas: as the director Jonás Trueba said, the concept of film as a perfect exercise in melancholy, retaining the images that time will erase in order to return to them. There is also a reflection on their capacity for narrative, on the possibility of story-telling through different media –visuals, sound, text– a story. In this case, the link between the reality of the images and their symbolic power is salient: and as a result the presence of the sea as a metaphor for awareness of death and loss that runs through the film.

The main problem with Marino’s film is what there is too much of, its excessive sentimentality. We are already moved by the story and the serious and natural way of telling it. When the director decides to recreate himself with the emotions of his characters, the obvious and easy emotiveness of those sentiments fall into unnecessary gushiness. A face, a withheld comment are often already enough. Fantasía manages to reflect on what really matters in film: life. And that is already a lot.

Fantasía is Basque production by the company Doxa Producciones, sold overseas by Feelsales and due to premier on 26 November with Vitrine Films. 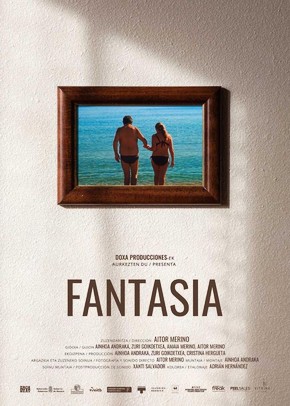