Watch a film about theatre people – or just watch a classical play, even – and you’ll likely be greeted by a duplication or mise en abyme-like effect. Why simply have a play, when you can have a play within a play providing whimsically meta complications? And we know professional actors like to carry their jobs around with them, where their backstage life takes on the characteristics of the theatre piece itself. Occupation [+leggi anche:
trailer
intervista: Michal Nohejl
scheda film], the debut feature by Czech filmmaker Michal Nohejl, is another run through these familiar ideas, acted – of course – with gusto, if a little too much ripeness, whilst hitting a Cold War-era political allegory bluntly on the head. The film had its international premiere at the Tallinn Black Nights Film Festival, partaking in the First Feature Competition, after an August theatrical release in the Czech Republic.

Although concerned with scrupulous historical accuracy, Occupation feels trapped in its period setting, as if it were a lushly velveted coffin, with its musings on loyalty and propaganda failing to resonate with current politics, and its revising of Prague Spring-era tensions also not adding much fresh to our understanding. But Nohejl and his co-writers Vojtech Masek and Marek Sindelka still achieve a nicely cynical and wry tone, reminiscent of the Czech New Wave films of that time, and also hark back to memories of Lubitsch’s Hollywood screwball To Be or Not To Be – where its Warsaw thespians, sick of play-acting, are entrusted to resist the occupying power themselves.

We begin with the actors finishing up an agitprop play dramatising the life of Czech journalist and resistance member Julius Fučik, the staging showing Vladimir (Cyril Dobrý), the actor playing him, in a Pietà-like pose as he is tortured by Nazi officers. The play’s director, Jindrich (Martin Pechlát), producer Reditel (Otakar Brousek) and all of the other actors – one of whom stays in his SS costume – then decamp to the theatre’s deserted and atmospherically lit drinking den after the curtain falls. Tense barbs are shared about the straitened cultural atmosphere amidst the occupation, and many pints of Czech lager are sunk. Then, who is to join their gathering, but a clearly PTSD-addled Russian soldier (Aleksey Gorbunov), who begins by offering to sell the actors gasoline, and then proceeds to make inappropriate advances towards a young companion of the actors; this is Milada (Antonie Formanová), the grand-niece of Fučik, who’s come to interview Jindrich – himself a formerly radical theatre-maker, who holds more pro-German sympathies than his colleagues.

Highlighting the fact that this is indeed turning into another tense chamber play, the soldier carries an assault rifle – and we know what transpires when these are introduced in the first act. The soldier eventually becomes a fatal threat to the theatre people, and a baldly allegorical drama is played out of collaboration and resistance, with an unlikely member of the ensemble finding himself in a role that mimics Fučik’s fate. The peril becomes so overwrought, it’s unrealistic to see these demure thespians suddenly acting like they’re in a big-budget war film. But a revealing streak still breaks through, of a particularly Czech kind of self-loathing: “We’re nothing but shit on the bottom of history’s shoe,” says one character near the end – and Nohejl’s film starts stirring the pathos it initially promised.

Occupation is a production of the Czech Republic, staged by Unit+Sofa.

Recensione: After a Revolution 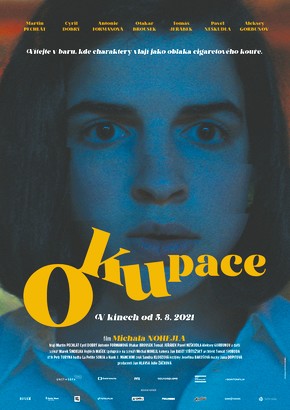