"The sissy combs her hair in her silk dressing gown. Neighbours laugh at her out of their rear windows. The sissy organises the curls on her head. Parrots, fountains and planets cry out in the courtyards. The sissy shamelessly adorns herself with jasmine. The evening grows strange with combs and vines.  The scandal sends tremors striped like a zebra. The sissies of the South sing on the rooftops!”

From this poem by the great Federico García Lorca comes not only the title of the film Singing on the Rooftops [+leggi anche:
trailer
intervista: Enric Ribes
scheda film], but also the spirit that permeates the first feature film shot solely by the Catalan Enric Ribes, released by Bteam Pictures in Spanish cinemas tomorrow 1 July, after having been screened at the D’A and Sheffield DocFest festivals. The film also echoes those of Pedro Almódovar, Rainer Werner Fassbinder and Un hombre llamado Flor de Otoño, which Pedro Olea directed in 1978 with a magnificent José Sacristán in the leading role.

Gilda Love (Eduardo according to his ID) is the central character here: a transvestite who still lives in El Raval, the most rebellious and authentic neighbourhood of a Barcelona that has succumbed to gentrification and the tourist theme park. Among its old, dirty and narrow streets, Gilda has her place, with almost a century of a busy, hectic and eventful life, surviving the hardships caused by a rampant consumerism that values youth more than seniority.

Because being a transvestite in the last decades of the past century, when it was a semi-clandestine activity, did not guarantee a pension. Eduardo finds himself having to depend on charity to eat while trying to keep his home, filled with pictures of Hollywood stars like Rita Hayworth, from whose most iconic character he has borrowed his stage name. Because Gilda wants to keep on working, performing and delighting the public, far from those old people's homes where some friends live who, faced with the threat of homophobia from their asylum companions, have had to (fatally) go back into the closet. But an unexpected encounter with a young girl will turn his existence upside down.

Quixotic and fanciful, very human and a fighter, in this film (written by the director together with the screenwriter Xènia Puiggrós) Eduardo/Gilda is a true survivor, a cabaret artist who, in difficult and dark times, raised the flag of dignity and equality, tolerance, freedom and respect, and who, at almost a hundred years of age, continues to show that they still wish to put on a pair of heels, a wig and hurl obscenities at the audience.

It also illustrates that those who were mistreated by their families are able to build a new one without being bound by social restrictions, and show affection, protection and tenderness. This neo-realist and fabulous film, empathetic and bittersweet at the same time, is dedicated to this person, witness and protagonist of an unrepeatable time, when many like her fought bravely from their humble place so that today the LGBTQI+ community does not have to hide or be ashamed, which Enric Ribes has shot with the absolute dedication of his friend Gilda Love.

Singing on the Rooftops is a production by Inicia Films.

altro su: Singing on the Rooftops

Recensione: Serviam - I Will Serve

Recensione: Sister, What Grows Where Land Is Sick? 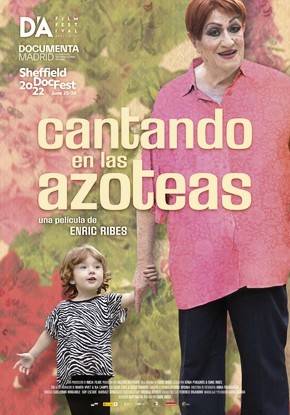 Recensione: Serviam - I Will Serve

Recensione: Sister, What Grows Where Land Is Sick?

ESCLUSIVA: Il trailer di Matter Out of Place selezionato in concorso a Locarno