"This is not an abstract issue, but the symptom of a serious problem.” On paper, it was far from a sure bet to make a film accessible to the uninitiated on the hyper-sophisticated mechanisms of tax evasion by the world's largest companies and fortunes, and on their very close connivance with a political-economic system that apparently never ceases to denounce these very undemocratic practices. Add the potential hives (or even legal crises) that such an in-depth investigation brought to the attention of a large public could trigger (since the powerful of this world are quite ticklish when it comes to exposing the backstage and arrangements between friends of the globalised system), and you’ve got a truly ambitious proposition.

That’s in fact the first line of defence orchestrated by those who occasionally (and for decades) find themselves caught red-handed: “it’s complicated.” It is on this smoke screen of figures to make you dizzy, these occult financial practices (tax havens and true-false black lists, international whirlpool of names, sprawling circuits of money circulation made as opaque as possible, “Irish doublet,” “Dutch sandwiches,” “tax ruling,” even the idea of locating benefits in geostationary satellites in non-taxable space, etc), these debates between experts and this pseudo-voluntarist political discourse in echo that documentarian Yannick Kergoat has managed to shed light, like a vampire hunter shining a spotlight on them, stalking them in every shadowy corner, and not least with a great deal of humour, in Tax Me If You Can [+leggi anche:
trailer
scheda film], shown out of competition at the 70th San Sebastián Film Festival.

Apple, Google, Amazon, AirBnb, Luxembourg “miracle,” the Balkany and Cahuzac French scandals, the offshore industry and its battalions of tax optimisation consultants, competition between states to attract capital, the Panama Papers, proliferating tax havens and banking establishments, etc., the film and its "guide for the crafty" retrace with great clarity (aided by interventions from insiders) cases that are often well known, but whose accumulation establishes the systemic evidence. But the main interest of this approach is to put them into perspective with the larger system that is supposed to control them, but which in reality seems to be part of the problem. The parade of leading politicians of all stripes, from the 1970s to the present day, fussing like white knights of the fight against tax evasion, and the meticulous and cruelly ironic deciphering of the results of these rantings (or lies, as the case may be) is terribly edifying in this respect. And all the more so when one contrasts, as Tax Me If You Can does with acuity and a lot of punch, the astronomical sums in question (each year, 600 billion euros of profits are said to be relocated to tax havens) with the perpetual and planetary mantra of the public authorities on the need to curb national debts, in particular through savings on public services (education, health, etc.).

The director (credited with the script of the documentary with the journalist Denis Robert), who does not hide his commitment, brings this emphasis to a simple and radical conclusion: "tax evasion is a sport reserved for the very rich" in a state environment dominated by oligarchies pretending to play cops and robbers (experts in circumvention), with the brunt of the damage being paid by SMEs and the middle classes, and by extension by almost the entire population, the playthings of a world where "magic money" exists, but most often beyond the reach of the common good. A reflection that some will no doubt qualify as leftist, but which is above all a statement of implacable (even despairing) common sense that the film makes accessible to all thanks to skilful editing that telescopes archives, with pedagogical and inventive animated summaries and a highly developed and salvific sense of general humour. As for the implementation from next year by the OECD countries of a minimum global tax rate of 15% for multinationals, it is a small step on a very long road towards tax justice where the brigands of shortcuts, the professionals of the exploration of legal loopholes, have certainly not said their last word.

Tax Me If You Can was produced by Le Bureau and Wild Bunch who together also handle the film’s international sales.

altro su: Tax Me If You Can

Recensione: The Art of Falling 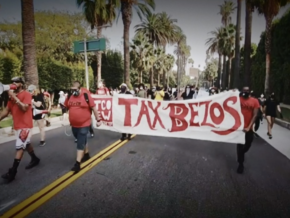 Edward Berger • Regista di All Quiet on the Western Front

Hans-Christian Schmid • Regista di We Are Next of Kin