29/03/2021 - This first feature film by the Swiss director and actress Karin Heberlein paints a courageous and sincere portrait of that crucial time of self-discovery: adolescence

Jana Sekulovska, Rabea Lüthi and Anja Gada in Sami, Joe and I

Selected for the Zurich Film Festival, the Filmfestival Max Ophüls Preis in Saarbrücken and, more recently, for the BUFF International Film Festival in Malmö – an event dedicated to movies for children and young adults - Karin Heberlein’s Sami, Joe and I [+see also:
trailer
film profile] permits us to spy (albeit respectfully) upon a group of three teenagers grappling with big decisions which will catapult them into adulthood. What does it mean to be a teen today? What dangers do they come across? What inspires them to hope for a better future than the one enjoyed by their parents? In her first feature film, Heberlein tackles these crucial questions through the eyes of three young women who are caught in the eye of the storm.

Sami, Joe and Lyla are an inseparable group of friends who will stop at nothing to defend their clan. At first glance, their daily lives seem characterised by endless chatter, laughter, confidences and secrets. The days drift lazily by, ensconced in nature but also holed up in the tall apartment blocks which they live in with their families. School is over and the summer promises great adventure. But problems sadly loom for Sami, Joe and Lyla: Sami must contend with her authoritarian parents (her father is a war veteran), Joe has to look after her brothers and sisters while her mother works non-stop, and apprehensive Leyla braves her first days as a trainee in a kitchen. Any dreams they might have had of a carefree summer spent experimenting with a newly rediscovered sense of freedom seem to slowly fade away, replaced by difficult decisions which could change their lives forever. It’s not easy for them to keep their heads above water, given their increasingly complicated and destabilising everyday reality, and the friendship which binds them together turns out to be the only lifeline which helps to keep them (barely) afloat. The adult world seems to want to crush them, imposing its (often absurd) rules and overbearing taboos upon them. But our three heroines won’t let themselves be beaten, trying with all their might to preserve their independence. Who will win? And, above all, what price must they pay for their freedom, which is fast becoming a pipedream?

Karin Heberlein looks to offer an alternative to the usual stereotypical heroines dominating the big screen. With their problems and dreams, hers are more akin to “girls next-door”, spokeswomen of a normality which transcends the fantasies bred by social media and the celebrity world, modern heroines grappling with the difficulties of a not-always-easy everyday life, which they tackle with surprising authenticity. Sami, Joe and Lyla don’t belong to an elite, and they’re not your typical high-school prom queens either. Instead, what makes them special and authentic is their fragile relationship with the world and their battle to protect their (elusive) identity. Heberlein’s vital and poetic film language (at times, a Swiss version of a Sofia Coppola-style approach) enables the audience to focus solely on the girls, placing them at the very centre of the story. Through Karin Heberlein’s outlook, normality becomes exceptional while everyday problems become an out-and-out battle for survival. Also of great interest is the music (Dominique Dreier and Kilian Spinnel), which accompanies the summer experienced by our three heroines like a discreet yet necessary shadow, emphasising the poetic fragility of this time.

Sami, Joe and I is produced by Abrakadabra Films in co-production with SRF Schweizer radio und Fernsehen. The former are also handling international rights.

more about: Sami, Joe and I

This first feature film by the Swiss director and actress Karin Heberlein paints a courageous and sincere portrait of that crucial time of self-discovery: adolescence

Female directors have come out on top as Evi Romen’s film was named the winner of the Focus Competition, with Fernanda Valadez’s flick dominating the Feature Film Competition 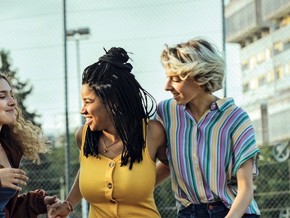