Seven years after Warm-Glow, a documentary which saw the Ukrainian director adopted by Zurich weave her way among visitors to Chernobyl, equipped with her iPhone, Marina Belobrovaja is once again tackling reality head on by way of Our Child [+see also:
trailer
film profile] (presented in the Visions du Réel Festival’s National Competition), a courageous and unconventional journey through the twists and turns of parenthood. What is it like to bring a boy/girl/gender-neutral child into a society which appears resistant to change vis-à-vis the concept of “family”? What is it like to raise a boy/girl/gender-neutral child outside of the “traditional” family unit? And furthermore, how does society view individuals who make the conscious decision not to have children? Marina Belobrovaja broaches these uncomfortable questions with courage and sincerity, comparing her own personal choices with those made by others who have decided to conceive outside of a heteronormative patriarchal system which doesn’t tolerate competition.

Sven lives in Dresda and was conceived through an anonymous sperm donor. Raised in the former GDR in the 1980s within a heterosexual family, he only discovered the truth about his origins later on. Sven decides to become a “donor” himself for Cat and Dani, a couple of female friends who ask him to help them conceive a gender-neutral child. Sandra, meanwhile, doesn’t want to be a mother; she is clear about that fact and refuses to be swayed by society or her partner Anton, who would quite happily step into the shoes of a father one day. Mindful of their mutual needs, Sandra and Anton successfully create a family unit outside of the “norm”.

Artist and filmmaker Marina Belobrovaja makes her way through this extensive network of atypical families, trying to understand the role she can and should play to help change attitudes, or at least get people talking about a subject which remains highly taboo. Her daughter Nelly was conceived using a sperm donor who has already engendered sixty children to date (although the director only discovers this fact at a later stage). Despite offering their unconditional support, the director’s family, based in Tel-Aviv, try to cope in their own way with this undoubtedly unexpected situation: a form of motherhood which frees itself of a patriarchal system which only grants the privilege of parenthood to heterosexual couples. Marina Belobrovaja wields her camera as if it were a gun, defending herself from a world which seems to constantly cast doubt over her decisions. The people she meets become mirrors in which she finds a part of herself; allies who have decided, like her, to experiment with alternative models of parenthood. With Our Child, Marina Belobrovaja lends a voice to those who are normally consigned to the shadows, labelled as “abnormal” just because they decided to go against the rules of a society which sees procreation – understood within the context of a heteronormative family - as the ultimate goal of human existence. But what if this wasn’t really the way of things? The road might seem mapped out, but it is still possible to choose alternative ways of living, and this is what Our Child seems to be suggesting.

Our Child is produced by GoldenEggProduction together with SRF Schweizer Radio und Fernsehen, and is sold worldwide by Israel’s JMT Films.

more about: Our Child 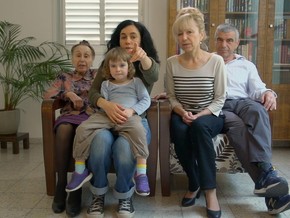