Critique : Once Were Humans

Goran Vojnović is a Slovenian filmmaker and writer working in cinema, on stage, and as a novelist and newspaper columnist. The common theme in his work is the relationship between the different ethnic groups living in Slovenia in so-called interesting times. In his latest film, Once Were Humans [+lire aussi :
bande-annonce
fiche film], which has just premiered in the Festival of Slovenian Film in Portorož, he steps further into the territory of the thriller, against the backdrop of the refugee crisis.

Leo (Francesco Borchi, who starred in Vojnović’s debut film of 2010 Pirano), his ex-wife Tanja (Maruša Majer of Janez Burger’s Ivan fame) and his friend Vučko (Moamer Kasumović, whose credits include Pirano and The Frog [+lire aussi :
critique
bande-annonce
fiche film]) own a restaurant somewhere in the Alps, in the border area between Slovenia, Austria and Italy. Business is slow, there are issues with credit lines, and they begin to despair when their private lender Sandi (the remarkable figure of Slovenian stage and screen, Vlado Novak) shows signs of wanting to pursue his legal options and take the restaurant over. Leo then strikes a not-so-legal deal with his mob-tied acquaintance Gianni (Italian actor Gianluca Gobbi, mainly active on TV) to steal his truck back for some cash. Subsequently, he and Vučko set off on their “mission” to Italy. They steal the truck alright, but in a very sloppy fashion and, to make matters worse, it’s the wrong truck. However, the real cause for concern is the truck’s load: a group of African refugees who are probably victims of human trafficking.

Leo and Vučko will turn to different, shady people they know, who might be able to help them “deal with” the load, while Tanja tries to shelter her and Leo’s son Luka from his father’s wheeling and dealing. But time is running out, pressure is mounting, decisions need to be made by these characters caught up in a serious moral dilemma, and many lives and futures are at stake.

Written by Vojnović, alongside Italian screenwriter and director Tommaso Santi, who has several shorts and a couple of documentaries under his belt, the story demonstrates a strong sense of economy, successfully tying up the many threads of this complex tale, involving detailed protagonists, in under 90 minutes’ running time. But it also suffers from weaknesses, especially in terms of the supporting characters, whose only purpose seems to be to serve this particular story. As a result, the talents of Novak, Boris Cavazza, who plays the Austrian brothel owner Martin, and Emir Hadžihafizbegović, who plays the Bosnian-Slovenian chop-shop owner Senad, are pretty much wasted on bit roles that last only for a scene or two.

The functionality of the script is matched by Vojnović’s directorial approach. His style is functional, simple, but also somewhat textbook and almost never outside of the box. Miloš Srdić’s cinematography is used to highlight the attractive mountain locations and the contrast between this scenery and the industrial architecture of the nearby towns and highways. Editing, handled by Ivor Ivezić, is tight, while the soundtrack by Tamara Obrovac sometimes strikes too obvious a chord, whether on acoustic guitar or on synths for the more thriller-esque scenes. Overall, Once Were Humans is a decent, well-acted, tonally balanced and humane film with solid production value, but there’s a little something lacking to help it reach a higher class.

Once Were Humans is a Slovenian film produced by Arsmedia. The movie was funded by the Slovenian Film Centre, with Viba Film offering up technical support.

plus sur : Once Were Humans

Critique : Once Were Humans 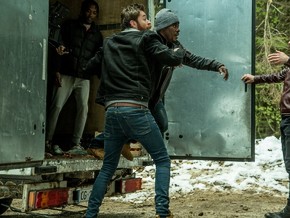